Posted on February 6, 2014 by Sherri Matthews

For this week’s Lingering Look at Windows challenge over at Dawn’s site, The Day After,  I have been inspired by short bursts of time spent by Hubby and I in the delightfully historic town of Lewes in the south east of England.

Lewes is nestled comfortably within the chalky South Downs of East Sussex with the River Ouse running prettily through it.  Pretty yes, although prone to flooding from time to time. Let’s hope not this time.

So much could be said about this town which dates as far back as prehistoric times.  It oozes history but I will keep it short. 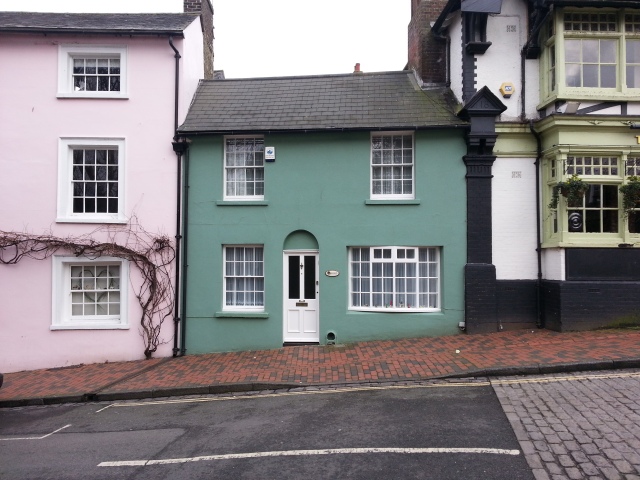 For one thing, Lewes boasts its very own castle as well as the remains of Lewes Priory, both of which date as far back as Saxon times. For another, it was the site of the Battle of Lewes between Henry III and Simon de Montfort in 1264.

Another interesting fact is that should you ever visit Lewes, you might come across a former windmill called ‘The Round House’ which was once owned by Virginia Woolf.  Who knew?

‘Harveys Brewery’, which sits by the river, was founded in 1790 and is famous for its Sussex Best Bitter (strong ale!) which, to this day, is distributed to pubs throughout East Sussex. I’m not a bitter drinker but I have it by good authority that it is a very good bitter indeed. 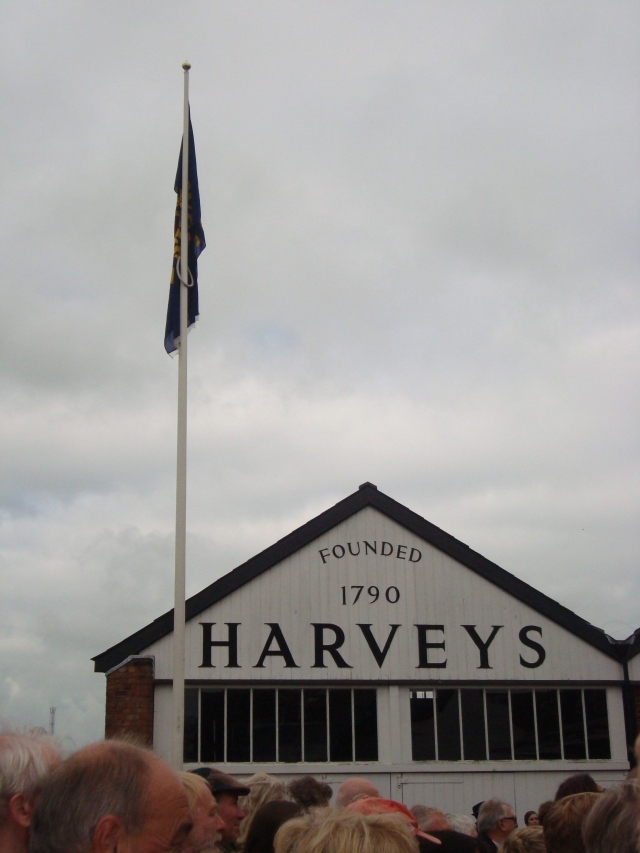 Lewes is, of course, best known for the ‘Lewes Bonfire’, held every 5th November. Celebrations are held in honour of the failed attempt of the Gunpowder Plot in 1605 by the Catholic Guy Fawkes and also in memory of the seventeen Protestant Martyrs who were burned at the stake in Lewes as part of the Marian Persecutions held between 1555 and 1557.

Controversially, a large effigy of the Pope is burned on a huge bonfire on this night and parades take place throughout the town as various ‘Bonfire Societies’ are represented. Think people parading through the streets with crosses on fire and that kind of thing.   It is the biggest and most famous celebration of Bonfire Night in the country.

All a bit ‘Wicker Man-ish’ for me, I have to say. (Although I do love that film. The 1973 one with Edward Woodward, not ‘that’ awful one with Nicholas Cage…)

Sadly, in December 1836, an avalanche occurred in Lewes, the worse that Britain has ever experienced. Heavy snow which had accumulated on a nearby cliff came crashing down on top of a row of houses on a street now known as South Street.  Fifteen people were buried, eight of whom died.

Today, there is a pub in South Street called ‘The Snowdrop’, so named in memory of this tragic event.  (I thought it was named after the flower). Eldest son told me this sobering bit of information during our first visit to this pub. (Highly recommended for excellent food, surroundings and vibe, by-the-way). 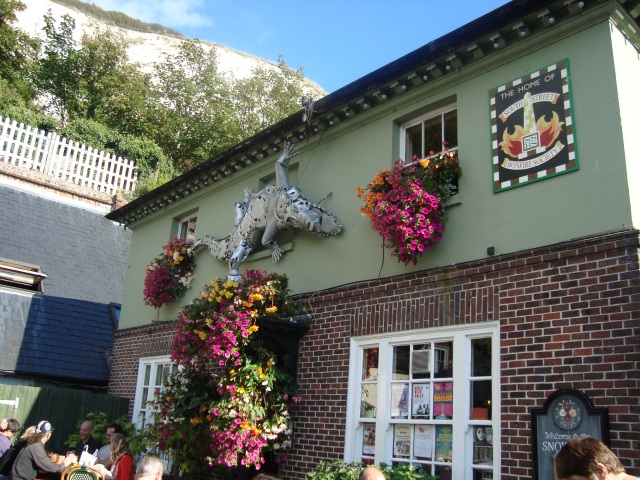 Windows at the back of The Snowdrop pub in Lewes, Sussex.
Notice the chalk cliffs behind it. Taken in late summer, 2013
(c) Sherri Matthews 2014

However, for me, and since I am fascinated by all things medieval and especially King Henry VIII’s reign, I was delighted to discover a fifteenth century timber-framed Wealden hall house known as Anne of Cleves house. It was left to her as part of her divorce settlement from King Henry VIII, although she never actually lived there. It is now managed by the Sussex Archaeological Society and is a museum. 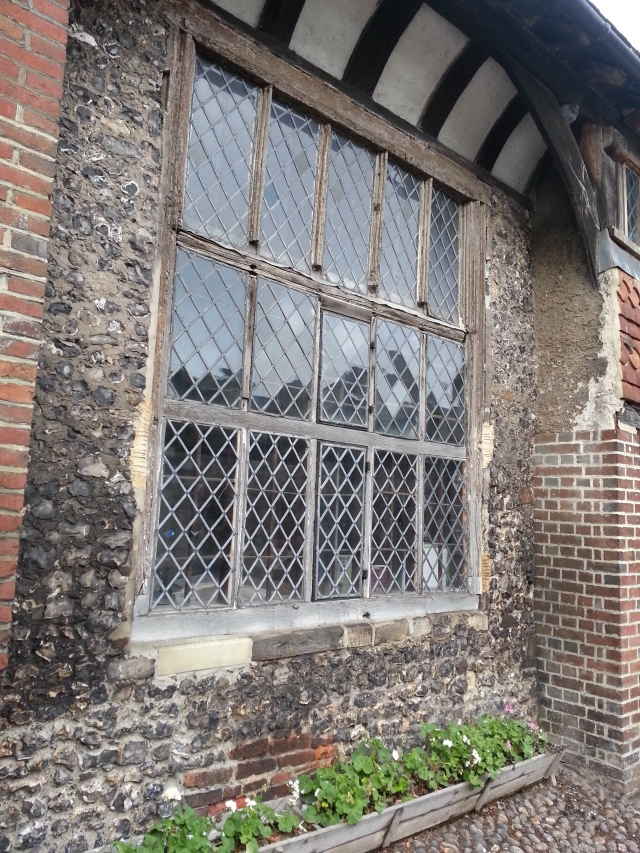 I have always felt that out of all of Henry’s wives, and despite her initial disappointments, Anne of Cleves came out the best.   After all, she was only actually married to him from 6 January 1540 to 9 July 1540.  Thomas Cromwell ‘found’ her for the King, living as she did in Germany, after Jane Seymour’s death and promptly commissioned Hans Holbein, a German artist, to paint a portrait of her, making sure to present her in the best possible light (no Photoshop or air brushing in those days, remember).

However, upon setting eyes on Anne in the flesh and noticing that she looked decidedly different to her portrait (a bit like online dating methinks, medieval style), Henry was not impressed, famously declaring, ‘I like her not’.  Perhaps he should have learnt a little German and got to know her a bit better first…

By that time, and unfortunately for him, Henry had no choice but to marry her but being ever impatient, rushed through an annulment on the basis that the marriage was never consummated.  Lucky Anne!

She was packed off to Hever Castle in Kent, the Boleyn family home and given a generous allowance as well as other properties, including Anne of Cleves House.  Known from then on and rather fondly as ‘The King’s beloved sister’, Anne was comfortable and well looked after with respect and kindness, living as a friend to both Henry and his children.

She must have missed her family in Germany terribly, yet she remained in England for the rest of her days until her death at the age of 41 on 17 July, 1557, in so doing surviving old King Henry and being the last of his queens to die.

More importantly, she got to keep her head which is more than can be said for most of King Henry’s other unfortunate wives.

Sherri is a memoir writer and storyteller with a camera and a blog, seeking publication of 'Stranger In A White Dress', her memoir set in the late 1970s of an English girl with an American dream, an adventure crushed by tragedy and redemption on the journey home. Sherri is compelled by a burning passion to bring true stories of broken lives and shattered dreams into the light of love, hope and a place in the world. Published along the way in national magazines, anthologies and online in memoir, poetry and flash fiction, Sherri also blogs about her travels, nature, writing and snippets from her life in California as a Brit 'Mom' for seventeen years, as advocate carer for her adult youngest, diagnosed at eighteen with Asperger's Syndrome and stories about her dad, from prison-life to the streets and back again. She is a regular contributor to 'Carrot Ranch' an online literary community. Today, Sherri lives in England with her hubby, Aspie, two black cats and a very grumpy Bunny.
View all posts by Sherri Matthews →
This entry was posted in A Lingering Look at Windows, HIstory, Photos and tagged A Lingering Look at Windows, Anne of Cleves, HIstory, King Henry VIII, Lewes, Medieval, photos of windows, Sussex. Bookmark the permalink.

90 Responses to A Lingering Look at Windows: Historical Lewes, Sussex