With the television on, as Big Ben chimed, cameras caught moments throughout the UK of not only gatherings of military commemorations for Armistice Day, but of ordinary people, including school children, stopping to show their respects in remembrance and in silence.

One camera panned to Somerset artist Rob Heard’s memorial Shrouds of the Somme on display at Bristol Cathedral. Each shroud carries the name of the 19,240 British soldiers who died on the first day of the Battle of the Somme in World War One.  We remember the  19,240 ‘Tommies’ who ‘went over the top’ and didn’t return.

Shrouds of the Somme Courtesy BBC

I remember men from both World Wars, like my husband’s grandfather, Walter Rideout, who fought in the Battle of the Somme in 1914 and his father, Albert Matthews, a ‘Desert Rat’,  who fought in El Alamein in 1942.  Both survived and returned home and barely spoke a word about it.

But Albert’s younger brother,  Stanley George Matthews, did not survive, for he lies buried deep below the black, heavy waters off the coast of Greenland, brought down with HMS Hood, sunk on 24th May 1941 by the German battleship Bismarck. He was twenty-two years old.

I think of such men today and of walking around Green Park in London back in March when I stopped for another reason, fascinated by the way the late afternoon sun beamed flames of light upon the magnificent Bomber Command Memorial.

Designed by architect Liam O’Connor from Portland stone, bronze sculptures of a Bomber Command aircrew stand tall in the midst of the memorial.  They represent the 55,573 British, Commonwealth and Allied Nations’ Airmen who served in the RAF Bomber Command and lost their lives during the Second World War. 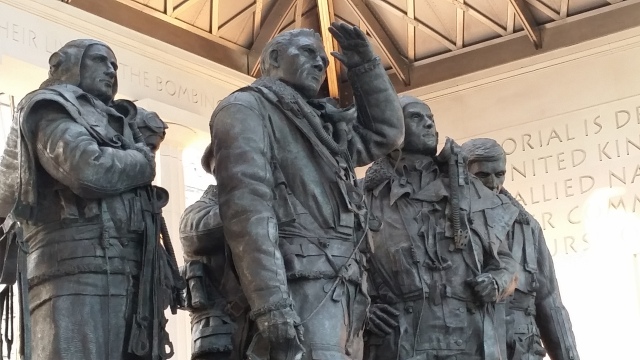 The memorial was dedicated by Queen Elizabeth II in 2012, the year of her Diamond Jubilee.

And in the words of Winston Churchill:

All these soldiers fought and died to give us the freedom we enjoy today, but I wonder what they would think of the way we treat that freedom now?

We honour them and their very great sacrifice with the deepest of gratitude. They died for our peace and safety, that we might live, and decently, when they could not, and we must not let them down.  We must remember them.

They shall grow not old, as we that are left grow old;
Age shall not weary them, nor the years condemn.
At the going down of the sun and in the morning
We will remember them.

Sherri's work is published in magazines, anthologies, her Summerhouse blog, and memoir column at Carrot Ranch, an online literary community. As a young mum of three, she emigrated from the UK to California and stayed for twenty years. Today she lives in England's West Country with her family and two beautiful black kitties. A keen walker and photographer, she is working hard on her memoir. Her 2021 entry to Fish Publishing Short Memoir Prize was shortlisted and also received a special mention at Spread the Word Life Writing Prize.
View all posts by Sherri Matthews →
This entry was posted in HIstory and tagged Armistice Day, Bomber Command Memorial, British History, First World War, Green Park, hope, London, Peace, Rememberance Day, Second World War, Shrouds of the Somme, Veteran's Day. Bookmark the permalink.

111 Responses to Lest We Forget