Posted on September 24, 2013 by Sherri Matthews

The first time I ever read a book by James Hadley Chase, the brilliant author of American noir genre crime novels spanning from 1939’s ‘No Orchids for Miss Blandish‘ to 1984’s ‘Hit Them Where it Hurts‘, I was all of thirteen and was immediately hooked.

Recently finding a list of his books online, I remembered many of the titles having read most of them. I adored the stylish book covers almost as much as the delicious ‘hit me hard and leave me standing ‘ style of writing.

You can see why:

You’ve Got it Coming – 1955
The Handsome, flawed hero & the beautiful, coniving woman 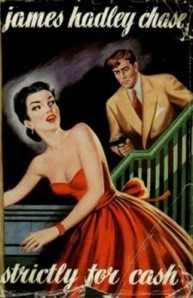 These books have it all: Gangsters, blackmailers, kidnappers,  cops, illicit affairs, treachery, fraud and of course murderers. Handsome but flawed heroes who just want to get rich quick and who also happen to have a weakness for beautiful but treacherous women. The private investigator who needs to earn a few bucks and has a knack for sniffing out a dirty criminal, or two.  The stories tumble along at engrossing, breakneck speed and always with a zinger of a  twist-in-the-tail ending.  What’s not to love?

All this makes for a fabulous read. Once started, I couldn’t put these books down.   I firmly believe that the first stirrings of my love affair with America began all those years ago, lost as I was in the settings, the characters and the plots of my James Hadley Chase novels.

Interestingly, I was shocked to discover many years later that James Hadley Chase was in fact an Englishman who had only visited America a few times and never actually lived there. He wrote his books based mostly on his research through maps and a slang dictionary.

Aside from the great plots, I was fascinated by the descriptions of American diners where the detective would invariably find himself sitting at the counter ordering coffee and ham and eggs.  Or steak and eggs.  With pancakes.  Not forgetting the maple syrup.

As a teenager living in 70s Britain this was unheard of.  I was reading these books at a time when we didn’t even know if we would have electricity that day, or night,  thanks to all the strikes that were taking place at the time.  Things were pretty austere in 70s Britain and to have ham or steak for breakfast was unthinkable, never mind with pancakes too.

Traditional English crepe-like pancakes, smothered in lemon and sugar, were a treat saved for Pancake Day (Shrove Tuesday) in February,  but I wondered about the ‘short stack’ of American pancakes that I read about in these stories, the ones topped with whipped butter and maple syrup dripping down their sides.

Dear reader, I wanted those pancakes.  I dreamed of going to an American diner one-day and ordering them, with ham and eggs and hearing the waitress say,

“How do you like your eggs Honey?  Over-easy or sunny-side up?”

How often do long-held desires buried deep within our hearts come to pass if we want them badly enough?  My ambition might not have seemed like much but I didn’t stop dreaming.

Yet, it was purely by chance that I met my American G.I.  We were both eighteen when we met. He was in the military, newly posted to England and I was astounded when he told me was from California.  I jumped when he offered to take me back ‘home’ to visit his family a year after we met.

Did I get to sit at a counter of an American diner and order pancakes?  You bet.  Did I order my eggs sunny-side up? No. Over-easy as it happens. And yes, the waitress called me ‘Honey’.

I was living the dream.

Many years later, widowed  then remarried with three kids in tow, we often used to visit Los Angeles where the grandparents lived.  My then father-in-law enjoyed taking us out to breakfast to a little hole-in-the-wall diner on Sunset Strip, which looked like nothing from the outside, but time-warped us into a different dimension on the inside.

The LA sky, bright-blue not a cloud in sight and short-sleeved warmth disappeared once inside. It was like stepping into a club late at night, lit only by dim, orange lamps hanging above round tables surrounded by brown, semi-circular leatherette booths. Ceiling fans hummed softly.

On the walls were black and white photographs signed by movie stars like Bette Davis, Sammy Davis Junior and Marlon Brando while soft blues crooned from the overhead speakers.   The waitresses wore frilly, gingham checked aprons,  flat, white shoes and took no flack.I was instantly transported to a scene straight out of one of James Hadley Chase’s books.

There, sitting in the shadows in a corner of the room in a booth all to himself, was my detective. Wearing a shabby suit, trilby hat perched over one eye and cigarette dangling from his lower lip, he pretended to read the newspaper.  But I could see that he was keeping an eye on the beautiful but treacherous woman and the poor sap sitting next to her in a nearby booth: it was only a matter of time before one of them slipped up.

My obsession with American pancakes has never gone away and now, when my chicks are  gathered back in the nest,  I bring out the griddle and make a batch of these beauties. As much as I love Jamie Oliver and Deliah, I  do have to confess that my all-time favourite ever since I was given my first American cookbook in 1979 is the incomparable Betty Crocker.

Nothing beats her for homespun, comforting family meals, fabulous cake recipes and yes, American pancakes. Her recipe book has been well used, as you can see.

If you are interested, here is the recipe using American cup measurements.  For ease of conversion, 1 cup of liquid is 8 fluid ounces or 250 ml and 1 cup of flour is 4 1/2 ounces or 125 g:

You can also add any combination of fruit if you so desire such as 1/2 cup of  blueberries but I like mine plain! When I make these for my family I always double up on the ingredients and they make plenty for 6 adults.

What I love about this recipe is the simple method unlike others which I’ve come across.   The trick is to whisk the eggs together first (I use a hand-held electric mixer) until they are as light and fluffy as possible, full of bubbles like this:

Then all you do is to simply whisk in the other ingredients but only do so until the batter is just mixed in and barely smooth, don’t over whisk it!

I pour out three dollops of batter on the griddle, not too much.   When I used to make them in the States I used an electric griddle but I couldn’t find one here so I use one on the gas hob instead and it works just as well. You can always add a little milk as you go if you want to thin out your batter, but I find the thicker the batter the fluffier the pancakes! 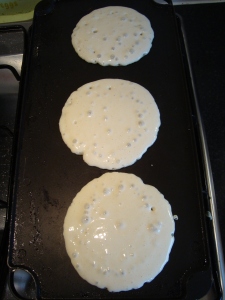 Pancakes on the griddle

As soon as the bubbles appear on one side and the edges start to firm up slightly you can flip them over.  Don’t press down on them, just let them rise for a couple of minutes and then transfer them to a hot plate.

That’s it!  Easy-peasy. Serve them up, top with maple syrup and butter if you wish and guaranteed you will be enjoying the fluffiest, yummiest American pancakes, maybe not in an American diner but certainly this side of Somerset! 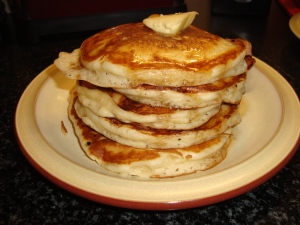 So thank you James Hadley Chase for setting my imagination alight with your mind-grabbing stories. For the escape I longed for as I struggled to find my way in life and also for introducing me to American pancakes.  Who knew that one day I would be rustling up a batch in my English kitchen?  I certainly didn’t.

Sherri's work is published in magazines, anthologies and her blog. As a young mum of three, she emigrated from the UK to California and stayed for twenty years. Today she lives in England's West Country with her family and two beautiful black kitties. A keen walker and photographer, she is working hard on her memoir. Her 2021 entry to Fish Publishing Short Memoir Prize was shortlisted and also received a special mention at Spread the Word Life Writing Prize. She was also a Page Turner Awards finalist.
View all posts by Sherri Matthews →
This entry was posted in Books & Reading, My California, Recipes and tagged American Pancakes, Betty Crocker, Books & Reading, Britain, California, crime novels, James Hadley Chase, Los Angeles, Noir Genre, Pancake Recipe. Bookmark the permalink.