Posted on January 2, 2014 by Sherri Matthews

Well here we are, it’s 2014 and I can hardly believe it! How are you all my dear friends? I do hope you all had a truly wonderful Christmas and that you saw the New Year in with style?  We saw ours in with a bang, literally.  The irony wasn’t too lost on me after the year we’ve had.  With mere hours to go before the clock struck midnight on New Year’s Eve, here, in a very wet and windy Somerset, we had a thunderstorm.  Yes, that’s right, as in booming thunder and white sheet-lightning and hail too!

2013 wasn’t going quietly. After all, who needs fireworks to see the New Year in when mother nature can do the job far better?

Back to Christmas, I do have to ask, did it really happen or was it just a dream?  I still have all my Christmas decs up so it must be true.  We had the most wonderful time together, although it was touch and go with the travel plans, thanks to not one, not two but THREE vicious storms which assailed us all the way to Christmas and back.

Here in Somerset we seem to be prone to flooding at the best of times and it was no exception on Christmas Eve.  Eldest son was due to arrive by train from Brighton by noon on Christmas Eve.  He ended up arriving at 8.30pm by coach due to cancelled trains because of all the storm damage but we were very grateful that he arrived at all, and safely.

It could have been much worse as indeed it has for many in other parts of the country who have had homes flooded and have been without power for days on end.  Just awful.

Then there was younger son Nicky who had to work that day only to find that he couldn’t get back due to his train also being cancelled. So early evening on Christmas Eve saw me taking a little road trip. The roads leading to the main dual carriageway out of our town were closed due to flooding so there was only one way left to go, through the villages.

A very pretty route but part of the roads were so badly flooded that at one point I seriously thought I wasn’t going to get through and Nicky would not be getting any Christmas lunch.  I made it though and brought my boy home so that once again I had all my chicks safely back in the nest! 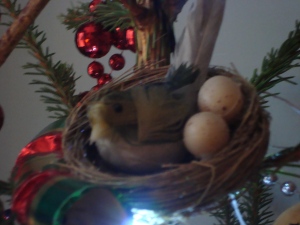 It was an interesting journey as on the way we saw:

The last several days before Christmas saw me doing a lot more driving than normal but thank you Classic FM – listening to you on the car radio kept me sane!  I not only listened to beautiful renditions of two of my favourite carols, What Child Is This and Coventry Carol but I was also entertained by Stephen Fry narrating the story of Rudolph (he really does get everywhere doesn’t he?  Stephen Fry I mean, not Rudolph) and the delightful children’s story, The Snowman, as put to music.

It was not the Christmas Eve I was expecting but it turned out to have unexpected blessings as these things so often do.

Driving through the wild, wet country roads of Somerset that Christmas Eve evening listening to the radio, I was stirred up by memories of watching The Snowman with my eldest son as a little boy when we first moved to America, one long-ago Christmas Eve night.

As we sat cuddled up together on the sofa watching the story unfold, I couldn’t believe my eyes when it came to the part where the little boy (the one in the story, not my little boy!) was flying through the air with his snowman and there below them as they flew above the English countryside was the instantly recognisable Sussex coastline with Brighton’s famous Pavilion and Pier.

As the years went by I shared with my son my memories of lazy, hazy days spent in Brighton. How I  spent many happy times there as a young girl in the early 70s and in particular of roller skating across the uneven wooden boards of the original West Pier but had been saddened when it was closed in 1975 and left to deteriorate.

(It went on to be destroyed by storms and fire (its second) in 2003 and still stands to this day as a burnt-out relic, awaiting possible renovation one of these days).

Shell of the West Pier in Brighton
(c) Sherri Matthews 2012

Never, in a million years, would I have guessed that my then four-year old son would grow up in California only to move to Britain as a young man of twenty to study at the University of Sussex and live in Brighton for many years to come, to this day in fact some ten years later.

This weekend we will be helping Nicky move back to Brighton (he used to live there too) where he will be starting his life anew after his recent break up with his ex-girlfriend.  Further away from home but he is much happier. Bittersweet for me.  Life really is stranger than fiction at times.

I will be back to ‘normal’ blogging next week and will do my best to catch up with you all in the meantime as best I can.  Next week also sees me celebrating my one year anniversary of blogging!  Here then to a new start, a time to reflect on the old but put on the new and look forward to the future with renewed hope and vigour.

(This, I might add, in the face of yet another storm, together with severe flood warnings, gale-force winds and high tides heading our way just in time for the weekend…)

So then I leave you with you this from Out of the Heart which appeared on my Facebook news feed. I thought it so inspirational and timely and I hope you will too as I wish you all a very Happy 2014, filled with blessings galore 🙂

Sherri is a memoir writer and storyteller with a camera and a blog, seeking publication of 'Stranger In A White Dress', her memoir set in the late 1970s of an English girl with an American dream, an adventure crushed by tragedy and redemption on the journey home. Sherri is compelled by a burning passion to bring true stories of broken lives and shattered dreams into the light of love, hope and a place in the world. Published along the way in national magazines, anthologies and online in memoir, poetry and flash fiction, Sherri also blogs about her travels, nature, writing and snippets from her life in California as a Brit 'Mom' for seventeen years, as advocate carer for her adult youngest, diagnosed at eighteen with Asperger's Syndrome and stories about her dad, from prison-life to the streets and back again. She is a regular contributor to 'Carrot Ranch' an online literary community. Today, Sherri lives in England with her hubby, Aspie, two black cats and a very grumpy Bunny.
View all posts by Sherri Matthews →
This entry was posted in Childhood Memories, Family Life and tagged America, Childhood memories, Christmas, Family Life, Happy New Year, Musings, My California, New Year's Eve, Storms, travel. Bookmark the permalink.