What better way to start a new blogging year than with a few challenges to add to the mix? For a little while now I’ve been thinking about taking up the Daily Post’s Weekly Photo Challenge for the simple reason that I rather like the idea of a task such as this which gives free rein to interpretation of the weekly theme while sharing a photo or two.

Quite a few of you already take part in this challenge and you have inspired me to do the same, so many thanks for that!  I hope that you enjoy this little detour which, after this week, I will try to post every Monday if all goes well.

This week’s challenge is: ‘Window’.  This excited me greatly as I happen to be obsessed with windows and shutters.  Doors too, especially old ones with peeling paint.  I love taking photos of them.

The photos I have decided to share for this challenge were taken in 2008 when Hubby and I spent a magical holiday in a delightful town called Makrigialos (Makry-Gialos) which lies on the South-East coast of the Greek Island of Crete.

One sun-baked afternoon and acting on the very enthusiastic recommendation of our holiday rep, a really lovely guy called Pete who lived somewhere up in the hills above the town and who just happened to hail from Brighton originally (small world, eh?), we hired a car and took a drive along a very dusty and narrow trail some 7 kilometers (just over 4 miles) up into the mountains to spend the day in the tiny village of Pefki.

Pefki was first recorded in the Turkish census of 1671.  Electricity arrived in 1970 and telephones in 1972.  To this day there are no facilities in Pefki such as cash machines, banks, hotels or post offices (no bad thing but just be sure to bring cash with you should you ever decide to visit!).

Yet Pefki boasts one of the  most famous tavernas in the area called the Piperia (‘Pepper Plant’) which just happens to offer absolutely stunning, panoramic views of the valley and coastline far below while you sit at trestle tables underneath the shade of an ancient olive tree eating delicious home-cooked traditional Cretan cuisine.

Which is precisely where we spent the most glorious afternoon on this particular day, chatting away with a lovely Hungarian couple.  Neither of us spoke each other’s language but we made an afternoon of it anyway, bonding over and helped greatly by a carafe of the locally produced raki and wine.

As the harsh, afternoon light dimmed into early evening and the cicadas quieted their midday song, fairy  lights lit up the old olive tree as if by magic as the locals serenaded us with their song.

I am getting carried away with my Cretan memories.  This post is supposed to be about windows. With these photos I can share with you just a tiny  glimpse of this treasure of a village-world hidden away at the top of a mountain. A short poem I felt inspired to write follows.  A very quick look through the window is all it takes.

One more thing, I’ll warn you now; if you ever do visit Crete and the village of Pefki, beware.  You will never be able to get it out of your mind. 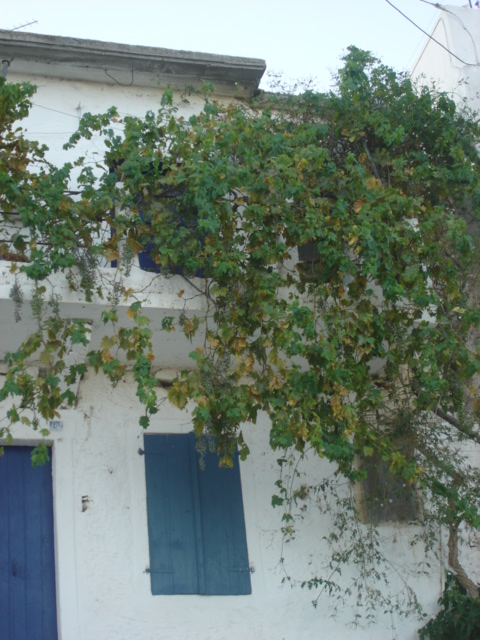 I love the way these flowering vines grow around many of the windows. A beautiful and natural way to deflect the searing heat of the day away from the window.
Pefki Village, Crete
(c) Sherri Matthews 2008

Cracked paint peeling from the window pane
as mid-summer’s sun bleaches the wood raw
As if it seeks, of an afternoon, to carve out its name.

A glimpse of my reflection caught
in the window’s glare against the ancient olive tree
Gives away my coy thoughts against this statue
As it bows to honour, far below,
The crystal-studded sea

Where, as I wait beneath its shade,
Veering far from the given path
To meet and remember my Cretan god who
took my hand beneath Diana’s moon and
Taught me Summer’s dance.

Sherri is a writer with work published in print magazines, anthologies and online. As a young British mum of three, she emigrated to California and stayed for twenty years. Today she lives in England's West Country, a full-time carer within her family. Her current WIP after completing her memoir is a psychological thriller.
View all posts by Sherri Matthews →
This entry was posted in Poems, Travel, Weekly Photo Challenge and tagged Crete, Foreign travel, Pefki Village, Photographs of windows, Poem, Poetry, postaday, Weekly Photo Challenge, Windows. Bookmark the permalink.