This week’s ‘Lingering Look at Windows‘ challenge is not letting me do what I set out to do. Another day for that.  Today, this is what I need to do.

What I can’t get out of my mind is the broken body of a three-year old boy called Mikaeel Kular found dumped in woodland behind the house where he once lived in Fife, Scotland.  Some 25 miles away from his home in Edinburgh. He hadn’t been seen at nursery since Christmas and his mother has been arrested in connection with his murder.

How many children die every day, how many corrupted and destroyed?  How many times do we read such terrible stories of innocents cut down before they have had a chance to live?

Why, when we are bombarded with news of disasters, terrors and murder day after day does this little boy’s story haunt me?  I don’t know.

There is nothing I can do.  I certainly can’t presume to know the facts but it doesn’t matter.  A little boy was found alone, dead and he is gone forever. 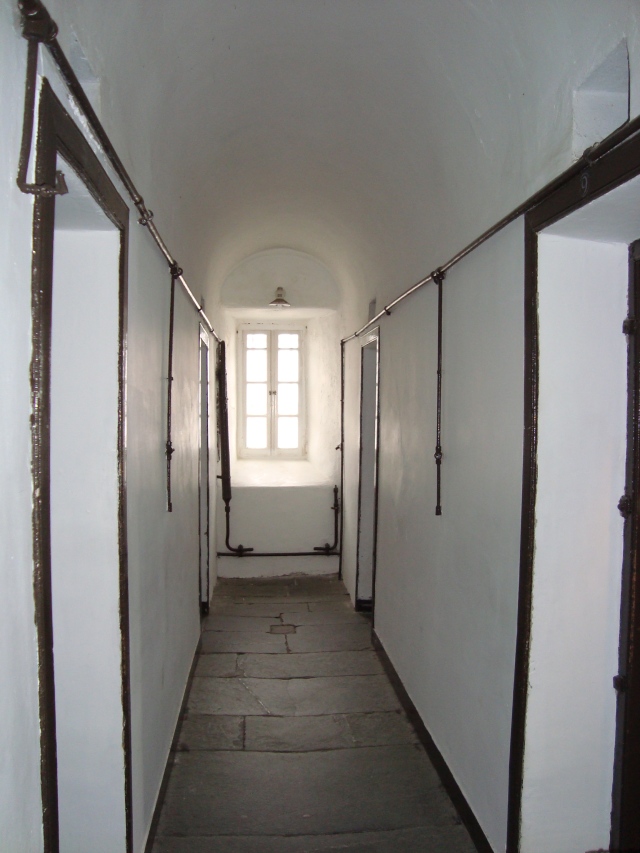 A few year’s ago, we took a holiday in Scotland.  It was the first time that I had visited and I was excited to do so. During our stay we visited historic Inveraray Jail which was built in 1820 at the same time as the courthouse.  By 1848 it became known as the New Prison when many improvements were carried out, making it a model prison for its day.

The Jail today is a museum and as we walked around its many corridors and rooms, including the inside of its cells, we couldn’t help but feel a little unsettled.   Indeed, the Jail is known for its ghostly sightings and phenomena.

Looking at this photo now I remember being drawn to the worn, flagstone floor of the corridor and then the way the light radiated through the window at the end of it. Especially as it was raining that day and the lamp above it was not switched on.

Now I think of the little boy as I stop for a lingering look at this window.  Jesus said ‘let the little children come to me’. From the walls of his hellish prison was this boy saved, gathered up in the arms of angels and carried into the light of salvation, of deliverance.

The light beckoned him and in an instant he turned to glance for one, last, fleeting moment at the life he was leaving behind and then, like a whisper in the wind, he was gone and peace was his reward.  Angels fly thee to thy rest.

His short, broken life has to count for something.

While bringing her memoir, 'Stranger in a White Dress: A True Story of Broken Dreams, Being Brave and Beginning Again' to publication, Sherri's articles, short memoir, personal essays, poetry and flash fiction are published in national magazines, anthologies and online. She invites her readers to share the view at her Summerhouse blog and is a regular contributer and columnist at 'Carrot Ranch', an online literary community. In another life, Sherri lived in California for twenty years, but today, she lives in England writing stories from the past, making sense of today and giving hope for tomorrow.
View all posts by Sherri Matthews →
This entry was posted in A Lingering Look at Windows, Current Affairs, Photos and tagged A Lingering Look at Windows, Angels, Children, Inveraray Jail, Jesus, Light, photograph of a window, Scotland. Bookmark the permalink.

46 Responses to A Lingering Look At Windows: Angel’s Light