Over at the Daily Post, the Weekly Photo Challenge for this week is ‘Street Life’.  Cheri puts the challenge to us in this way:

‘For this challenge, document the movement (or stillness) of a street: tell a story with your snapshot, capture a scene that reveals a bit about a place, or simply show us where you live — or a path you often take.’

With this in mind, here is my story entitled,  ‘The Streets of Old City Dubrovnik’.

The beautiful country of Croatia (once part of Yugoslavia together with Bosnia and Slovenia until declaring independence in the 1990s) is home to the Old City of Dubrovnik.  Otherwise famously known as ‘The Pearl of the Adriatic’, this medieval walled city is nestled on the Dalmatian coast; from the 13th century onwards it became an important Mediterranean sea power.

Dubrovnik is home to beautiful Gothic, Renaissance and Baroque churches, monasteries and palaces, all of which were severely damaged by an earthquake in 1667 and then again in more modern times by the Serbian attack against the city in 1991.

After a ceasefire was called, and due to its great concern for the damage done, UNESCO (United Nations Educational Scientific and Cultural Organization) named Dubrovnik a ‘World Heritage Site in Danger’ and immediately coordinated a major restoration programme.  Click here to read more about this programme and for a more comprehensive history of the Old City.

We were privileged to have been able to visit Dubrovnik in 2012.

Approaching by a narrow, twisting road which drops down to the Old City and its hidden streets, I was able to take this shot.  This was the moment when I first caught sight of it, having been blocked by the tree-lined road until then. Stunned into silence, I immediately understood why Dubrovnik is known as ‘The Pearl of the Adriatic’.

My photo doesn’t do it justice, it is simply breathtaking. 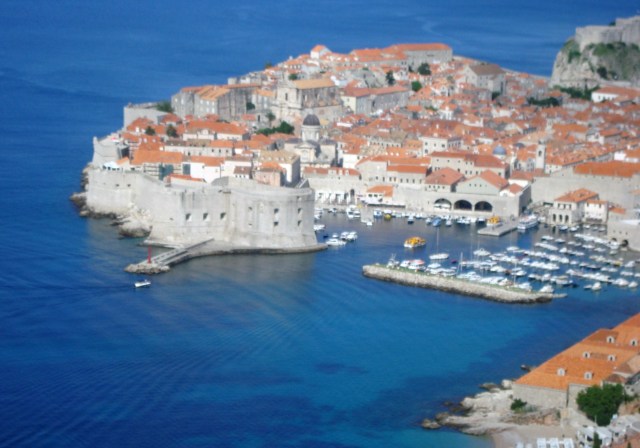 The Pearl of the Adriatic – Old City Dubrovnik taken from the road above. Look at that sea!
(c) Sherri Matthews 2014

Once inside the city, climbing the city walls gives a magnificent view of the rooftops.  The  buildings seem to be hiding the streets as if protecting them, closing in on themselves.  What secrets lie there I wonder, what stories are to be told? 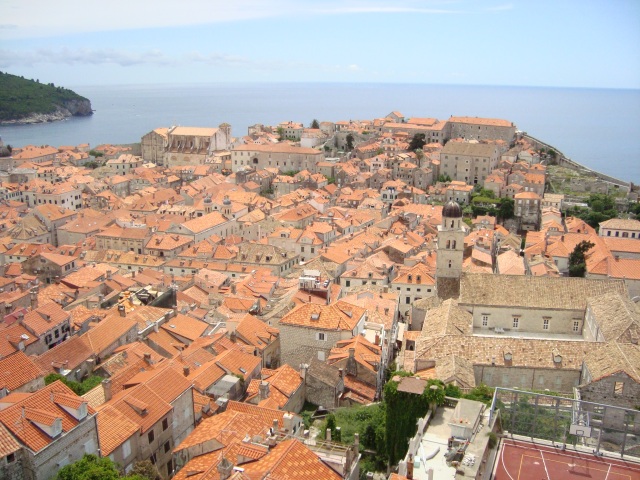 View of the Old City of Dubrovnik taken from the city walls. Notice the Clock Tower (c) Sherri Matthews 2014

Climbing back down from the city walls, you can get a closer view of the streets below, beckoning to be explored.

View of the streets below from the Old City Walls, Dubrovnik
(c) Sherri Matthews 2014

Back down in the streets of the Old City, there are numerous alleyways at every twist and turn lined with cafes, restaurants and shops. 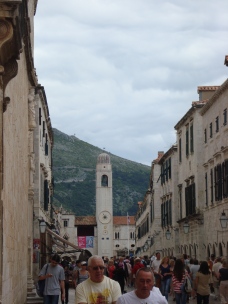 View of the Clock Tower 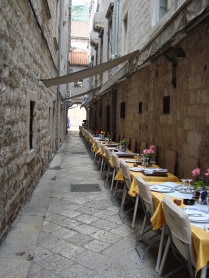 Typical of the numerous cafes lining the alleyways 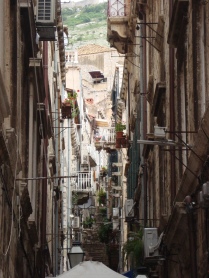 View through an alleway to the streets above

Waiter standing by the entrance to a cafe – Dubrovnik, Croatia

There are steps to be climbed leading to medieval churches and monasteries.  On the day we were there a jazz band, having travelled all the way from Washington DC, were preparing to play later that evening as part of a jazz festival.

Coming back down some steps after exploring a church, we were greeted by this welcoming cafe at the bottom.  It was lunchtime, so perfect timing! 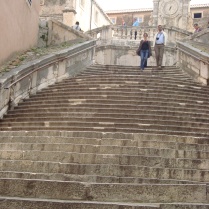 Steps leading up to a church

Cafe at the bottom of the steps 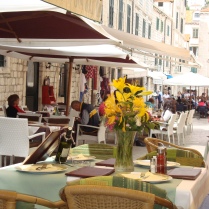 Continuing to walk through the streets you will soon enough be led to the medieval harbour and out to the crystalline Adriatic sea. 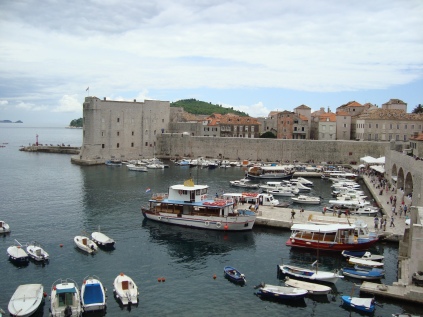 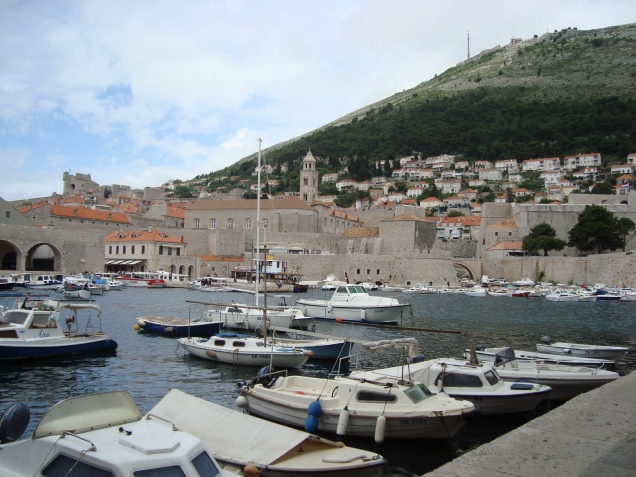 Then, by evening, the streets are bathed in a soft, warming light. 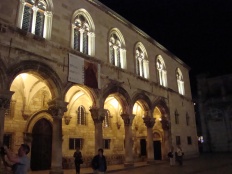 The Clock Tower by night

In the streets of Old City Dubrovnik you will see many stray cats.  They are in surprisingly good condition as the business owners take good care of them.  If you don’t mind cats, one of them might even come up on your lap for a cuddle.  I didn’t mind at all and I don’t know who was more happy, me or the cat!

There are many more photos to share from our trip to Croatia but that will have to wait for another time, should you care to see them.  I think I will have to include a post of its own dedicated to all the cat friends we made over there! For now, I hope that you enjoyed this walk with me through the streets of the Old City of Dubrovnik.

Sherri is a memoir writer and storyteller with a camera and a blog, seeking publication of 'Stranger In A White Dress', her memoir set in the late 1970s of an English girl with an American dream, an adventure crushed by tragedy and redemption on the journey home. Sherri is compelled by a burning passion to bring true stories of broken lives and shattered dreams into the light of love, hope and a place in the world. Published along the way in national magazines, anthologies and online in memoir, poetry and flash fiction, Sherri also blogs about her travels, nature, writing and snippets from her life in California as a Brit 'Mom' for seventeen years, as advocate carer for her adult youngest, diagnosed at eighteen with Asperger's Syndrome and stories about her dad, from prison-life to the streets and back again. She is a regular contributor to 'Carrot Ranch' an online literary community. Today, Sherri lives in England with her hubby, Aspie, two black cats and a very grumpy Bunny.
View all posts by Sherri Matthews →
This entry was posted in Photos, Travel, Weekly Photo Challenge and tagged cats, Croatia, Dubrovnik, Photos of the Old City of Dubrovnik, postaday, travel, UNESCO, Weekly Photo Challenge. Bookmark the permalink.

100 Responses to WPC: The Streets of Old City Dubrovnik, Croatia