As Cheri puts it:

‘As you look through your lens, think about how your image might convey something bigger: a snapshot of how we communicate with one another, even if we don’t speak the same language.’

As soon as I found out about this challenge I knew exactly which photo I wanted to share, being one from the series of photographs I took when visiting the The Cotswolds in early March.

I’ve always been taken with old churches and the wealth of history and hidden treasures contained within them.

Since my children grew up in California, when we visited ‘back home’ in England I wanted them to know as much about their British roots as their American ones and hopefully instill in them the same love of history I’ve always enjoyed!

This meant introducing them to places I wanted them to know about and not just in London, such as The Tower of London and Westminster Abbey but other places along the length and breadth of this wonderful Isle of ours, from Whitby Abbey and York Minster ‘up north’ to  Salisbury Cathedral and Stonehenge ‘down south’ in the plains of Wiltshire.

(A Minster is an honorific title given to particular churches in England, most famously York Minster in York.  (source credit: Wikipedia))

Surprises met us in the most unexpected places.  For instance, we didn’t expect to discover that King Ethelred, brother of King Alfred the Great (849 – 899 AD) and King of Wessex from 865 to 871 AD, is buried in a tomb inside the church at Wimborne Minster, a small market town in Dorset just a few miles from where I once lived before moving to the States!

(My inner geekiness is coming out now, I love this stuff!)

While visiting the village of Burford in the Cotswolds, I had to stop by the church, parts of which date back as early as 1160 AD.   Looking casually around and admiring the architecture and beautiful stained glass windows I was drawn to the font, which itself dates back to the 12th century. 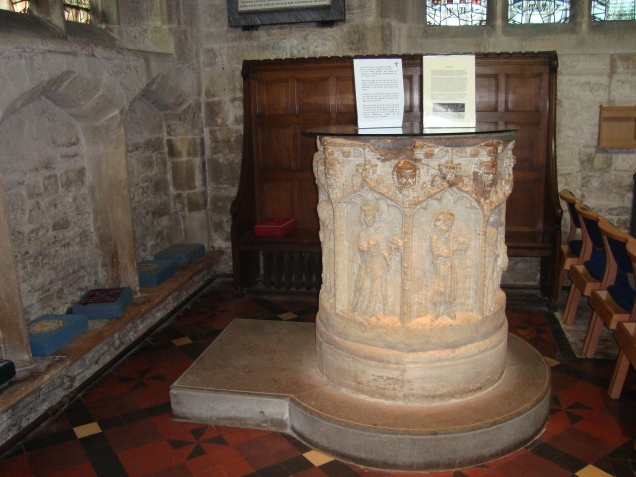 Immediately, I noticed this delightful little gem; beneath some protective glass is a carving on the lead on top of the ancient font: 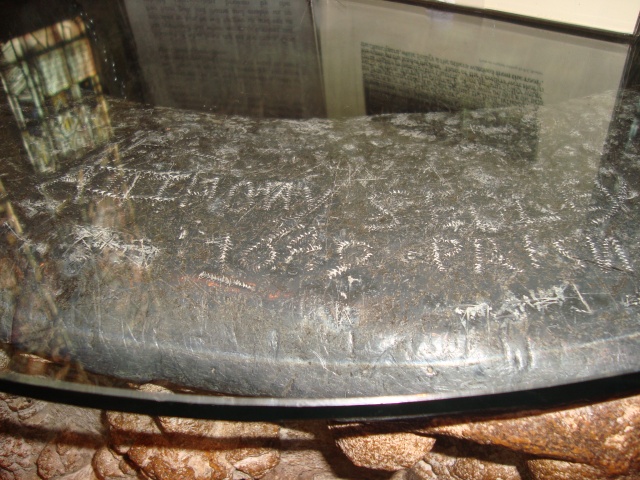 Carving on the font at Burford Church, The Cotswolds, England (c) Sherri Matthews 2014

A sign showing a copy of rubbings taken of the original writing (placed on top of the font, hence the reflection captured in the photograph) explains the brief story; who this man was and why he felt the need to inscribe his name on the font in this way:

Tracing of original carving by Anthony Sedley on the font at Burford Church, The Cotswolds
(c) Sherri Matthews 2014

Out of the 300 plus ‘Levellers’ (a group of radicals who, during the years of the English Civil War, challenged the control of Parliament – source credit: History Learning Site) trapped and imprisoned by Oliver Cromwell’s soldiers on the night of 13th May, 1649 and for three nights hence at Burford church, three were executed (shot) and subsequently buried in the churchyard.

Sedley wasn’t one of them, escaping with his life, and his letters, carved out for us to read some 360 years later, appear to be his only remaining memorial.

I wonder what became of  ‘prisner’ Anthony Sedley?

While bringing her memoir, 'Stranger in a White Dress: A True Story of Broken Dreams, Being Brave and Beginning Again' to publication, Sherri's articles, short memoir, personal essays, poetry and flash fiction are published in national magazines, anthologies and online. She invites her readers to share the view at her Summerhouse blog and is a regular contributer and columnist at 'Carrot Ranch', an online literary community. In another life, Sherri lived in California for twenty years, but today, she lives in England writing stories from the past, making sense of today and giving hope for tomorrow.
View all posts by Sherri Matthews →
This entry was posted in Family Life, Travel, Weekly Photo Challenge and tagged British History, California, Family Life, King Alfred The Great, Oliver Cromwell, postaday, The Cotswolds, travel, Weekly Photo Challenge. Bookmark the permalink.