Friends, Phones and Phubbing: Do We Have A Failure To Communicate?

Ever been out with a friend and halfway through your cosy little chat they stop to check their texts and emails? Well, you might be surprised to know that if so, you have just been ‘phubbed’.

What does this mean?  Well, apparently the word ‘phubbing’ means the following:

‘Snubbing others in a social setting by checking your phone‘.

In fact, recent research by advertising agency McCann shows that 37 percent of people now think it ruder to ignore a text than it is to ‘phub’ your friends.

Really?  I wonder what age-group this refers to?

There is no doubt that the way we communicate with one another has changed rapidly for those of us who grew up without mobile technology. The only kinds of telephone we had were the kind that plugged straight into the wall. 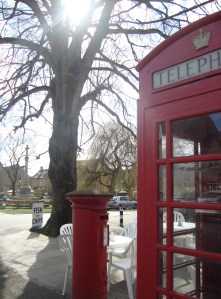 We had one of those heavy, black telephones (the kind you now see in antique shops) but my friend had to use the telephone box at the end of her street.

We would arrange a time to talk and cram in as much as we could before either her coins ran out or my mum told me time up.

No such thing as free local calls, you see.

Needless to say we rarely talked on the phone with our friends ; we said all we had to say in person, face to face, at school.

Sounds archaic, I know, but least we didn’t have to worry about being phubbed.

When I moved to California in 1986 there was no internet or cheap, international calling plans.

So Mum and I wrote letters, great reams of them back and forth and we planned phone calls once every two weeks for one hour, budgeting for them as they were so expensive.

Letters from home were my lifeline.

It would be different today.  We would Skype and email, and what’s wrong with that?

Now Mum and I text and say ‘LOL’ (which we used to think meant ‘Lots of Love’ until my daughter put us right)!

What then of our use of mobile phones?  I’m as guilty as the next person of jumping to order when I hear a text come in, but when I’m out with a friend I really do try not to do this, unless I’m worried it might be from one of my kids.

Spending quality time with family and friends without constant interruption emanating from our phones shouldn’t be so hard to achieve, surely?

We’ve all witnessed couples who sit down at a table in a restaurant and immediately pull out their phones, bury their faces in them and communicate wonderfully.

Just not with each other.

While their phone friend might be fascinated to hear this, we mugs standing in line are not.

My first mobile phone was a clunky Nokia with a Union Jack faceplate to remind me of home when I lived in America.

Years later I graduated to a Motorola flip phone and I loved it.

It didn’t take great photos but I could use it quickly and easily for calls and texting which is all I needed.

I dropped it more times than I care to remember but it always kept going.

One time, while walking through town shopping in the rain, the heel of one of my boots caught on the slick kerb of the pavement as I attempted to cross the road.

I went down like a ton of bricks, landed firmly on both knees, bum in the air.

Not a pretty sight.

My phone flew out of my bag, which had tipped upside down, and skidded into the middle of the road.

Of course this happened right in front of some workmen who were painting the outside of a department store.

“All right love?” came the concerned words of one of them as he rushed over to help me, but I was already up and standing in the middle of the road, dusting off my phone.

“No thanks, I’m fine!” I replied breezily as I limped off. Never mind my bruised and blooded kneecaps.

The point being?  Well, I was more concerned about my phone than anything else!

Is that normal?  I seriously doubt it…

Now I have a Smart phone, oh yes I do.  As some of you know I often post photos here from my Android.

I’ve only had it a few months and already the glass has shattered.

Smartphone?? Before the glass broke…

I have to be careful.  I still can’t text as quickly as I could on my faithful flip phone.

One slip of the finger and I’ve ordered three books from Amazon, called emergency and sent money to someone I don’t even know on PayPal.

But it has its uses;  for one thing, believe it or not, I can use it for making calls.

In summing up then, I do wonder, are we able to balance our ever-growing reliance on modern technology with the care and nurture of our personal relationships, face-to-face, taking time out to switch off and so escape communication overload?

I certainly hope so!

Today’s youngsters are born with a phone in their hand.  Second nature.  But does this mean that the way they communicate with one another is any worse (or better) than the way we of a certain, ahem, age/generation do?

Last year, when in California, I was with my daughter and her father at his place.  We were going out for the day to visit family and waiting for her to get ready.

While waiting, I became engrossed in something on my phone, although it couldn’t have been much as I wasn’t on ‘roam’ and I didn’t have any internet.

EH (ex-husband) was texting away on his phone…

When my daughter appeared to tell us she was ready, neither of us heard, lost as we were in our separate phone worlds.  Exasperated at being ignored, she blurted out, “Can you hear me? I’m ready!”

Oblivious before, we both looked up at her, wide-eyed and speechless.

‘Honestly!’ she huffed,  “It’s like dealing with a couple of teenagers, always on your phones!”  Obviously this wasn’t the only time this had happened to her…

Maybe it’s not the young who have the problem with communication after all.  Those of us who have had to adjust to this ever-changing world and the way we interact with one another might just have to be careful.

Case in point: There are those who consider ‘phubbing’ to be so rude that ‘youngster’, 23 year-old, Alex Haigh from Australia, started a ‘Stop Phubbing‘ campaign on the internet.

So perhaps there’s hope for us all.  Go Alex!

I do wonder though whether ‘phubbing’ could be the least of our problems.

While bringing her memoir, 'Stranger in a White Dress: A True Story of Broken Dreams, Being Brave and Beginning Again' to publication, Sherri's articles, short memoir, personal essays, poetry and flash fiction are published in national magazines, anthologies and online. She invites her readers to share the view at her Summerhouse blog and is a regular contributer and columnist at 'Carrot Ranch', an online literary community. In another life, Sherri lived in California for twenty years, but today, she lives in England writing stories from the past, making sense of today and giving hope for tomorrow.
View all posts by Sherri Matthews →
This entry was posted in Current Affairs, Friendship, My California, Travel and tagged California, Cell Phones, Communication, Family Life, Friendship, Letter Writing, Modern Technology, Phubbing, Social media, travel. Bookmark the permalink.

95 Responses to Friends, Phones and Phubbing: Do We Have A Failure To Communicate?