Posted on September 3, 2014 by Sherri Matthews

What I love about the Weekly Photo Challenge is the ideas it gives me, often completely out of the blue.  For instance, I thought I knew just which photos I was going to post for this week’s ‘Dialogue‘ theme until I read this:

‘Dialogue is an engaging conversational exchange.

When it comes to photography, dialogue can be perceived as a consensual interaction between two images.

Placed next to each other, each photograph opens up to meanings that weren’t there when viewed alone.

Each composition reveals the photographer’s specific sensitivity to certain content or visual elements.’

So I had a re-think and what came to mind almost immediately was a photograph I took while on board the Arcadia cruise ship back in 2006.  This was our honeymoon you see, a two-week cruise around the Caribbean.   Neither of us had ever been on a cruise ship before and we haven’t since.  We are often asked if we will go again and although we never say definitely not, we also don’t say definitely yes.

If the opportunity (and finances) ever presented themselves again however, I’m sure we wouldn’t turn it down.

Neither of us had ever suffered from seasickness before the cruise, so we smugly assumed that we would be fine.  During a rather rough crossing around the Bay of Biscay in early April (returning from the sultry climes of the Caribbean to sleet and snow back home is no joke), hubby and I, although no doubt looking a little green around the gills, were some of the few who were able to stick it out without being confined to our room.

I do wonder though that this might have been because I discovered, quite by chance, that a greasy burger and a pint of Stella are the perfect cure for seasickness.   But that is another story which I will save for another time…

Meanwhile, back to that photograph.  One of the several bars on-board Arcadia is named ‘Electra‘.  There you can dance and drink the night away should you so wish.  What we particularly loved about it was the way beams of neon lighting lit up every surface of the place.   It was, well, electrifying.

One evening while there, we got the idea to try a glass each of Crème de Menthe.  Daring weren’t we?  I remember being fascinated by the way the fluorescent lighting bounced off the table and the way it caught the contrasting emerald liquid shimmering in our glasses, so of course I decided to play around with the camera. You know, have a little fun.

Then I remembered another photo of a glass ceiling taken from a different part of the ship.  What do you think?  Do you see any particular ‘dialogue’ going on here? 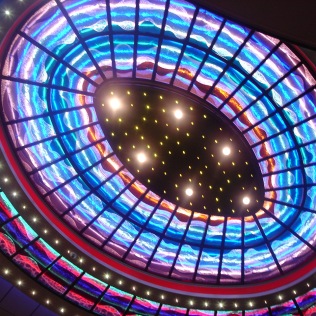 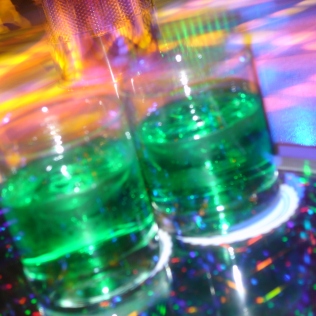 Just as an aside, and for a little more fun, here are the photos I was going to post originally, illustrating as they do a bit of ‘dialogue’ in the literal sense.  Well, almost…

If a picture paints a thousand words, then I wonder what these guys would have to say: 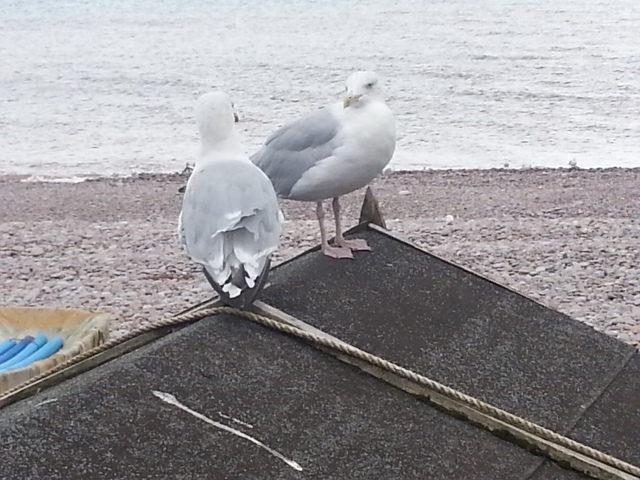 These three photographs were taken with my mobile phone camera at Budleigh Salterton in Devon, a most delightful little seaside town that we discovered last weekend. More photos to come soon.

Sherri's work is published in magazines, anthologies, her Summerhouse blog, and memoir column at Carrot Ranch, an online literary community. As a young mum of three, she emigrated from the UK to California and stayed for twenty years. Today she lives in England's West Country with her family and two beautiful black kitties. A keen walker and photographer, she is working hard on her memoir. Her 2021 entry to Fish Publishing Short Memoir Prize was shortlisted and also received a special mention at Spread the Word Life Writing Prize.
View all posts by Sherri Matthews →
This entry was posted in Birds of a Feather, Family Life, Weekly Photo Challenge and tagged Bay of Biscay, birds, Budleigh Salterton, Cruise Ships, Daily Prompt, Family Life, Glass, postaday, Seasickness, Seaside, Weekly Photo Challenge. Bookmark the permalink.