Good or bad, love ’em or hate ’em, we never know when a surprise is about to burst into our day, catching us completely off-guard.  Like the surprise I received on Tuesday morning.

For some time now, I have made a concerted effort to get dressed, have breakfast, and do a few chores before heading into the Summerhouse and start writing.

But it is so very easy to break this discipline and too often, despite knowing better, I think, ‘Oh, I’ll just have a quick check of my blog’ and three hours later I’m still blogging, the morning is lost and I’m still in my PJs. 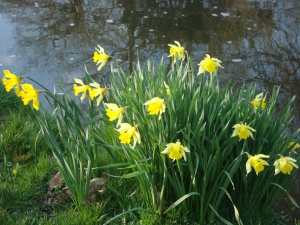 Tuesday was such a morning.

Hearing a knock at the front door and realising annoyingly that it was almost noon and I was still typing away,  I wasn’t too perturbed, thinking it was ‘just’ the postman delivering yet another package for my daughter, and he’s seen me in my PJs too many times to count, I’m ashamed to say.

Except this time, it wasn’t the postman.

It was David Laws, the nationally known Lib Dem MP (Liberal Democrat Minister of Parliament and Minister of State for Schools for those unfamiliar with British politics) standing on my doorstep, greeting me by name with a hearty smile and a vigorous hand shake.

I recognised him immediately and all I could do was to smile weakly and hope the hole in the floor would swallow me up, even as he told me he was making friendly house-to-house calls as part of his campaign for the upcoming General Election, and wondered if I had any particular concerns.

Coincidentally, he had attended January’s meeting of the monthly support group I attend, run by our local branch of the National Autistic Society for parents of grown Aspie children. I hadn’t been able to make that meeting and I was bursting to ask him about funding for improved services for those with Autism in Somerset, but I didn’t dare.

In fact, I would have loved to have invited him in for a cup of tea and a hot cross bun if I had been properly dressed.  A golden opportunity lost for me, but a huge relief for him, no doubt.  So he said goodbye and that was that. 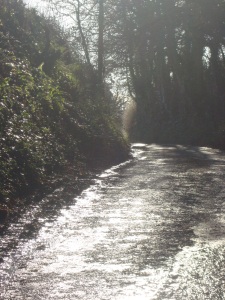 A few days before this, I had received a very different surprise. Some of you may remember the short memoir competition I entered, deadline 30th January (and the trials surrounding my laptop issues).  I got my entry in, just, and waited, nervously, for the results, expected April 1st.

But last Saturday, an email popped up announcing the Fish Publication Short Memoir Prize Results.  What?  Were they playing an early April Fool’s trick on us?

I clicked on the link, hands shaking, and immediately saw the winner, second and third places and the seven runners-up. My name wasn’t there.  I didn’t think it would be, but there’s always that slight glimmer of hope isn’t there?  There has to be.

Hardly daring to breathe, I trawled down the short list.  Still nothing.   My heart sank as I scrolled down, and then suddenly I saw it: my name.  I made the long list!

Okay, so I didn’t win a prize and I didn’t make the short list, but I made the first cut into 197 selected out of 780 entries and for that I was ecstatic.  At least it meant that my story had ‘something’ if not everything that the judge was looking for at the time.

The next day, still basking in my long list glow and after almost two years, I at last was able to visit my dad at the halfway house where he has lived for the past four months.

Although more frail than when I last saw him, and a little unsteady on his legs, as an 82-year-old, lifelong alcoholic with a penchant for robbing banks (or trying to), he isn’t in too bad a shape. 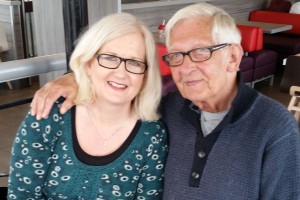 In fact, he walks along the prom, as he calls it, by the sea every day and is one of those people who gets a suntan just from poking his head around the door.  And the twinkle in his eye sparkles still, particularly when he tells me he is being a ‘good boy’.

On the way home, a twinge of sadness plucked at my heart for the lost years and all that could have been, all that our family could have shared if only my dad had managed to beat his alcoholism, but I also felt a deep sense of gratitude for the chance to spend this time with him, with the promise and the hope of more days like this to come.

Then, wouldn’t you know it, I received another surprise a mere four days later, this one through the letter box and not so nice: apparently we had parked a few minutes over our alloted time at the car park of the restaurant where we had taken Dad, resulting in a parking ticket: £100 or £60 if paid within 2 weeks.

My dad is the one on parole, but I think I am the one who needs reforming:  I have a sudden urge to go back to that car park and litter it with sweet wrappers.  Let’s see what the council has to say about that…

A week of surprises then, and I thank you all so much for wishing me well for the Fish competition.   I do regret one thing, and that is that I didn’t pay for a critique as I would have relished the feedback, being a little green when it comes to entering literary competitions (shhhh, don’t tell anyone).

Ultimately, making the long list has given me hope for my writing, and an armful of hope is something we all need.

‘Hope is the thing with feathers that perches in the soul –
and sings the tunes without the words – and never stops at all.’
~ Emily Dickinson 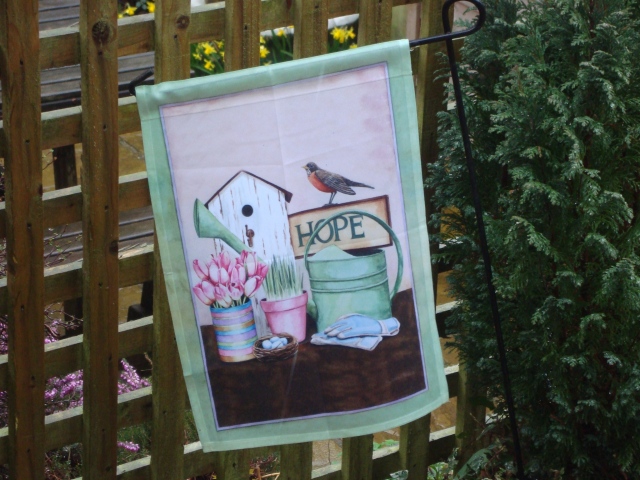 This beautiful ‘Hope’ flag arrived this week from my dear friend in California, a wonderful surprise.
An American robin to say hello to his cousin Sweet Robin!
What perfect timing, hope through Easter’s message.
(c) Sherri Matthews 2015

And if there’s one thing I’ve learnt, it’s that we need to keep watch and be vigilant, ever ready for when those surprises jump out at us.  At the very least, we should be dressed. After all, you never know who might turn up on your front door step.

I hope for you the best kind of surprises, and a very Happy Easter!
Love Sherri x

While bringing her memoir, 'Stranger in a White Dress: A True Story of Broken Dreams, Being Brave and Beginning Again' to publication, Sherri's articles, short memoir, personal essays, poetry and flash fiction are published in national magazines, anthologies and online. She invites her readers to share the view at her Summerhouse blog and is a regular contributer and columnist at 'Carrot Ranch', an online literary community. In another life, Sherri lived in California for twenty years, but today, she lives in England writing stories from the past, making sense of today and giving hope for tomorrow.
View all posts by Sherri Matthews →
This entry was posted in My Dad's Alcoholic Prison, Writing Competitions and tagged Alcoholism, Autism, British Government, crime, Fathers & Daughters, Fish Publication, hope, NAS, Parole, Short Memoir Competition, Surprises, writing, Writing Competition. Bookmark the permalink.

99 Responses to The Write Surprise