The Voice Of Asperger’s Syndrome

I look at the photographs of the five-year old girl with the scarf tied around her shoulders like a cape and tears slide down my face.  In some, she holds a paint brush and looks down intently at her growing work of art.  In others, she makes shapes out of playdoh, walks in the garden, sits in the bath or sleeps soundly in her bed.  But in every photograph appears her constant companion – her cat Thula.

Not so unusual you might think, except that this beautiful little girl is autistic and it is her cat who has helped Iris find her voice in a world where before, she hardly spoke or smiled.

Now, as her mother writes, Iris will speak to her cat – ‘Sit cat’ – and interacts in ways she never could before.  This moves me to tears, but I cry also because with her capes, her love of painting, the way her hair falls softly across her face and her ever-present cat, this little girl in so many ways could be my daughter when she was the same age.

My third child (Aspie D), was not diagnosed with Asperger’s Syndrome until she was eighteen.  Although she is on the Autistic Spectrum, she has a form of autism that is commonly described as ‘high functioning’.  She doesn’t have the problems with speaking like Iris,  but she struggles to make sense of her world because of communication, sensory and social difficulties, as clearly explained in this article by the National Autistic Society.

Her anxiety levels, already on high alert, kick into sensory-overload in public; hyper vigilant of her surroundings, the energy and concentration it takes for her to focus on a conversation and say the right things exhausts her, as she thinks only of making her escape from the loud; from the clatter; from the disorder and the chaos swirling all around her.

It was the safety at home with her family and her pets who calmed her when returning from a day at school.  There, she felt only loneliness, unable to understand when the other girls wanted to talk about dolls and fixing hair and watching ‘girly’ programmes. All she wanted to do was to wear her brother’s tee-shirts, make capes out of pillow cases and walk down to the creek and get her hands dirty looking for frogs in the mud and reach into the sparkling, cool water for tadpoles and salamander eggs to bring home to hatch in our pond.

The worse thing to ask someone with Asperger’s Syndrome is, ‘What’s wrong with you, why aren’t you smiling?’ Or tell them, “Why don’t you just go outside or meet up with your friends?” Seventh Voice expresses what this really feels like in her excellent post: ‘Things I wish people would stop saying to those of us with Asperger’s Syndrome‘.

At such times, feeling cornered; misunderstood and exposed, the blankness of Aspie D’s expression belies the all-consuming thoughts and emotions crashing through her over-stimulated, anxiety-drenched brain.  Unable to express what she really felt for so long, silently enraged at her powerlessness within a society that wanted her to conform, to be ‘normal’, to be what others expected her to be, only taught her how to become socially avoidant.

I read recently that studies show that the brain of a child with autism retains forty-two percent more information at rest than the average child.  Is is any wonder that anxiety and exhaustion plays such a huge part in the lives of those on the spectrum? 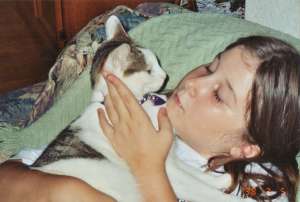 Reading about Iris and her cat Thula, I think of Maisy, our fourteen year old tabby.

‘Found’ by my daughter in a kitten room at a cat shelter near our home in California, their bond formed from the moment eight week old Aurora (as she was named at the shelter) sprang onto Aspie D’s lap as she kneeled down in a sea of kittens.

Today, their bond is stronger than ever. I knew the value of pet ownership for children, but I didn’t know about the life-changing role ‘therapy’ pets play for those on the Autistic Spectrum (Maisy, like Thula, is not trained as a therapy cat, she’s ‘just’ a pet, but she also loved to take baths with Aspie D), something that is now scientifically proven.

An autistic little girl found her voice through her gift of painting and her therapy cat Thula, her story beautifully told and photographed by her mother in the recently released Iris Grace.

My daughter at twenty-three travels her own path to find her true voice, each day bringing her ever closer despite her life-long challenges.  Along the way as I journey by her side,  grateful and honoured to call myself her mother, I came across the video clip below on Facebook. It is the only time I have heard my daughter say this is exactly what it feels like  when she goes out.

Please, if you only have two short minutes, I would humbly ask you to watch this clip.   I find it difficult at times to explain what it is like for my daughter living with Asperger’s and how it affects her daily life.  This clip, I hope, will help. It might make you cry as it did me and my friends on Facebook who watched it, but it also brings powerful voice:

Taking this opportunity to let you all know that Charli Mills is hosting a flash fiction competition over at Carrot Ranch to help raise funds for an autistic boy Noah and his service dog Appa. Cash prizes too!

The deadline is extended to March 31st, all details here.

You can read Shawna Ayoub Ainslie’s latest post with updates about her son Noah and his service dog Appa at The Honeyed Quill here.  The photos alone will stir your soul.

While bringing her memoir, 'Stranger in a White Dress: A True Story of Broken Dreams, Being Brave and Beginning Again' to publication, Sherri's articles, short memoir, personal essays, poetry and flash fiction are published in national magazines, anthologies and online. She invites her readers to share the view at her Summerhouse blog and is a regular contributer and columnist at 'Carrot Ranch', an online literary community. In another life, Sherri lived in California for twenty years, but today, she lives in England writing stories from the past, making sense of today and giving hope for tomorrow.
View all posts by Sherri Matthews →
This entry was posted in Asperger's Syndrome and tagged Anxiety, ASD, Asperger's Syndrome, Autism, Carly's Kitchen, Carrot Ranch, cats, Flash Fiction Competition, Iris Grace, National Autistic Society, Service Dogs, Seventh Voice, Therapy Cats, Voice. Bookmark the permalink.

125 Responses to The Voice Of Asperger’s Syndrome