Posted on December 9, 2013 by Sherri Matthews

Good morning dear friends and here I am, as bright-eyed and bushy-tailed as I intended (despite some doubters in the crowd!) on this cold December, Monday morning. I hope that you all had a lovely weekend?

I can report that in between sipping genteelly one or two glasses of bubbly during the course of the weekend, we did manage to:

Other than that, and not getting any decorating done (except for the lights on the tree) what was most important was that I got to spend time with my boy. With all that he has been through since September it is so good to see him a bit happier, offered a new job which means that he can move back to Brighton in the new year and also looking forward to a fresh start and a brighter future.

More important this, I’m sure you would agree, than running around like a chicken with its head cut off trying to get Christmas off the ground?  After all, there are two weeks or so to do that, starting NOW.

Yet it seems that the celebrations must continue despite my ever-rising Christmas panic because it would appear that Father Christmas has visited me a little earlier than usual this year in the form of several of you lovely people who have been so kind enough to nominate me for a plethora of awards (hope that doesn’t sound too much like bragging but I didn’t know how else to say it!!).

So many in fact (and I’m actually quite embarrassed about this) that I will be doing three separate blog posts, one after the other, to make things easier.  Hope you can stand it!

So even though it’s Monday morning, I hope you are in somewhat of a party mood as I’m about to kick this one off with first round!

Firstly, lovely Ilka of her delightful blog, Simplyilka,  nominated me so kindly for The Versatile Blogger Award.  Ilka is a scientist, environmentalist and medical writer who just happens to have a passion for writing too!  Her delightful opening on her ‘About’ page says, ‘this blog was my kids’ idea!’ and  her desire to share ‘science with a smile’  certainly shines through in megawatts!

Around the same time, another lovely new friend, Glynis Jolly of Speculations Impressed,  also nominated me for this award. Glynis writes about her thoughts, ideas and emotions as she shares her memoirs with her readers and her tagline ‘My Perils with writing’ captures the way in which she explores her writing and the journey that she is on.

Thank you so much Ilka and Glynis for thinking of me for these awards!

In the time that I was preparing this post, and while away from my blog this weekend, I was amazed to see that my lovely friend Sandra over at quirkybooks has been extremely busy and so very kind to nominate me for several awards, the first three I will mention here (yes, there’s more!):

The Versatile Blogger Award, the Sunshine Award, The Dragon Loyalty Award and also the WordPress Family Award, all of which I’m greatly honoured to receive and especially honoured to be considered part of Sandra’s WordPress cyber family which warms my heart greatly. 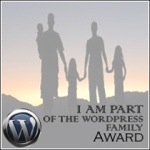 Sandra adores her four guinea pigs and just happens to be a writer who, in addition to her quirkybooks blog site has a website called beatredundancyblues and teaches blogging as an aid to recovery for those who have lost their jobs through redundancy.

I recently commented on one of Sandra’s blog posts about my redundancy story, albeit briefly, and Sandra very kindly posted my comment as one of several ‘redundancy success’ stories on her site.  I was thrilled that she wanted to share my experience with her readers as I had never really thought of it as a success story as such, merely as a way to show that it is possible to get a life after 50 even when you think you are finished!  If you are interested, you can read it here.

Since I have previously received all the above awards and having nominated others for them all fairly recently, I will not be participating in the rules this time but I wanted to make sure that I gave my thanks to all three of these lovely ladies and also give a shout-out to their must-see blogs.

Sherri's work is published in magazines, anthologies, her Summerhouse blog, and memoir column at Carrot Ranch, an online literary community. As a young mum of three, she emigrated from the UK to California and stayed for twenty years. Today she lives in England's West Country with her family and two beautiful black kitties. A keen walker and photographer, she is working hard on her memoir. Her 2021 entry to Fish Publishing Short Memoir Prize was shortlisted and also received a special mention at Spread the Word Life Writing Prize.
View all posts by Sherri Matthews →
This entry was posted in Awards, Current Affairs and tagged Awards, Blog, Blogger, Christmas, Dragon's Loyalty Award, Reduncancy, thank you, The Sunshine Award, The Versatile Blogger Award, The WordPress Family Award, WordPress. Bookmark the permalink.