The Luck of the Irish and My Californian Earthquake

Today is St Patrick’s Day, as if you didn’t know.  You would think that since I am a quarter Irish thanks to my paternal grandmother, I would be leaping about all over the place to the strains of Riverdance (and you know how much I love to dance, and I will dance to anything, except Abba), but it never meant much to me growing up as we didn’t really celebrate it growing up here in England.

I remember that it was my mum and dad’s wedding anniversary (1956), but it wasn’t until I moved to California and my children started school over there that I really got into the spirit of things.

This meant corned beef and cabbage for supper and making Leprechaun traps for my daughter’s Kindergarten class.  We lived in hope that, when caught, the Leprechaun  would reveal the secrets to finding the pot of gold beneath the rainbow but I’m still waiting on that one.  Not so lucky there.

Thinking back to those days in California I was troubled to hear news this afternoon of an earthquake striking Los Angeles; thankfully there doesn’t seem to have been too much damage.  It does, of course, bring back my own earthquake memories.

My two biggest fears when I knew that we were emigrating to America, specifically to  Los Angeles, were of a) being shot; and b) falling into the centre of the earth during an earthquake. Too bad we weren’t moving to San Francisco as Clint Eastwood (aka Dirty Harry) would have protected me, I’m sure of it.

I had already experienced my first earthquake in 1981. I worked as a Paralegal for a law firm in downtown Los Angeles on Wilshire Boulevard on the seventh floor of a very tall, glass building.  This was my last day in that job, a job I loved.  Sadly my first husband had passed away a few months before and I had made the decision to move back ‘home’ to England. I was due to head out to the airport that afternoon.

The day held mixed emotions for me: I was sad at having to say goodbye to friends and work colleagues who had helped me through a difficult time, but I was relieved to be returning home to the bosom of my family, even if it meant having to fly, something I dreaded. I didn’t like it then and I don’t like it now, but needs must.

Then, out of nowhere, I felt the floor judder beneath my feet.  Then a hard shake followed by a deep rumble.  Somebody screamed and another yelled, ‘Earthquake!’ as I rushed to the window across from my desk only to watch, horrified, as skyscrapers all over downtown LA swayed from side-to-side like concrete trees in a strong wind.  I thought this was the ‘big one’ and surely we were all doomed.

A few hours later, I was never so glad to be sitting inside the air-conditioned cabin of a Boeing 747 in all my life: my earthquake terrors far outweighed any flying fears that day.

The next time I experienced an earthquake was a few years later while living on the central coast of California: specifically, October 17th, 1989. 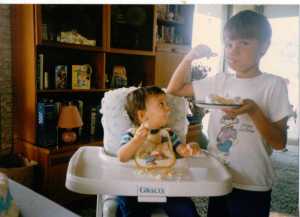 Eldest Son, seven years old and home from his day at school, was watching Donald Duck (remember him?) on the TV while I prepared a meal.  Little brother, soon-to-be one year old Nicky, was sitting in his high chair, happily playing with his toy cars.

Standing at the sink peeling potatoes, I suddenly felt a most peculiar sensation, as if the floor had jolted out of place and I had to grab the counter to steady myself.

Then I noticed the water in our fish tank sloshing out and over the sides; when I saw Nicky rocking from left to right in his high chair, I knew what was happening even if he didn’t, as evidenced by his gleeful squeals of delight at this ‘fun game’.

At that moment, I was so thankful for the earthquake drills held at my son’s school so that despite my initial panic, I remembered that the right thing to do was to stand beneath a door jamb.

Grabbing Nicky out of his high chair and pulling Eldest Son to my side, there we stood, huddled together, while the house ‘rolled’ up and down to the deep rumbles of what sounded like a train roaring by.

I was so scared and tried not to show it for the boys, but I didn’t know if this was just a warning of a bigger one to come or if it was already a much bigger one but further away and we were feeling the tail-end of it.  When at last it ended I was more than relieved. The ‘big one’ I had been dreading had come and gone and we had survived!

Watching the news report that evening I was shocked to learn that we had indeed felt the tail-end of an earthquake that had registered 6.9 on the Richter scale which had hit ten miles north of Santa Cruz, some four hours north from us. The damage was extensive and 63 people lost their lives.  I will never forget the enduring and terrifying images of the bridge and freeway collapsing in San Francisco and of cars driving into the disappearing road right in front of them.

I remember thinking how much more terrifying it must have been for those who lived near the epicenter further north from us.

We later moved to Paso Robles, more inland and closer still to the San Andreas fault which runs right through it.  By that time I was in earthquake denial.  Thankfully nothing much happened and after living there for ten years, I returned to the UK with my children. A mere three months after our return, while watching the news one evening, I couldn’t believe what I was hearing.

A 6.5 earthquake had hit Paso Robles, causing the clock tower to sheer off the historical building which was just across from the park where my children had played for many years. I heard from a friend that the damage throughout the town was substantial.  Certainly it was surreal watching the BBC World News with Governor of California, Arnold Schwarzenegger, standing right there by ‘our’ park in our hometown giving an interview.

As it turned out, in all the years I lived in California I didn’t get shot or get swallowed up into the bowels of the earth by a catastrophic earthquake.  What did I have to fear?  The neighbour from hell? A strained marriage? George Bush? Perhaps, but in the end, everything worked out: maybe it really did come down to the luck of the Irish after all.

Sherri is a writer with work published in print magazines, anthologies and online. As a young British mum of three, she emigrated to California and stayed for twenty years. Today she lives in England's West Country, a full-time carer within her family. Her current WIP after completing her memoir is a psychological thriller.
View all posts by Sherri Matthews →
This entry was posted in Childhood Memories, Family Life, My California and tagged Arnold Schwarzenegger, California, Childhood memories, Earthquakes, Emigration, Family Life, Los Angeles, News, Paso Robles, San Francisco, St Patrick's Day. Bookmark the permalink.