The Weekly Photo Challenge this week is ‘Split-Second Story’ in which Shane asks us to:

‘…capture an image that tells a full story in a single frame.’

We’re asked to put our National Geographic hats on and become a documentary photographer, capturing  a candid moment in time of a person, place or thing through a single image.

So, what story shall I tell for this challenge?  There could be so many.  Time to think and trawl through the memory banks, which is easier and more helpful than going straight to the endless photographs.  For as many as I have saved digitally, there are hundreds more stashed away in boxes.

The photo that came to mind though was easy to find, and this is my split-second story:

Both my boys were Scouts.  In fact, Eldest Son made it all the way to Eagle Scout.  You bet I’m proud!  Youngest Son Nicky, seen here as a Cub Scout, went on to Boy Scouts until he decided to pursue Tae Kwon Do instead.

An annual event held by the Boy Scouts of America is the Pinewood Derby.

For my British friends, this is a competition whereby you fashion a racing car out of kits comprising a block of pine wood (hence the name!), plastic wheels and metal axles.

The cars are then raced,  in twos or fours, down a special wooden track raised at one end so that once let go, they travel by their own momentum.

All very specific and all very traditional.  Also very competitive with the dads (and some moms!).

It’s all about the way the lead weights are strategically positioned on the car, how the wheels and axles are fitted, how well, or not so well as the case may be, the car is sanded, painted and varnished.

The cars are weighed before they race to ensure they are all ‘legal’ and it is all done by process of elimination.

Nicky had grown up watching his older brother enter the competitions over the years and we had a few disappointments along the way; the car was too slow, too bulky, the wheels were put on wrong, the weights in the wrong place.  You name it, we did it.

Then it was Nicky’s turn.

The race was announced, to be held at one of the elementary schools in our community, and Nicky and his dad set to work.  All very serious stuff.  We figured we had learnt a few lessons along the way.

The day came, Nicky showed up but he knew only one or two other boys as most were from visiting packs.  All standing about proudly showing off their cars, excited as can be.

Then the race began.  Tensions rose, dads took their places, anxiously guiding their sons into position when it was time for their cars to race.

The  elimination process began.  Nicky got through his first heat, his car whizzing by the others.  Then the next heat, his opponents biting the dust and one flying off the track half way down.

Heat after heat and Nicky’s car kept going, beating every rival until the very last race and it came down to the last two.  The big one.

By now the crowd could only manage a few whispers as all everyone could do was to stare at Nicky and ask, “Who is he?  Where did he come from?  Is he going to win?”

Dear reader, Nicky won that race and we were ecstatic!  He was pretty pleased too! The look on everyone’s faces was an absolute picture as they asked the question, “Who is this usurper out of nowhere?” 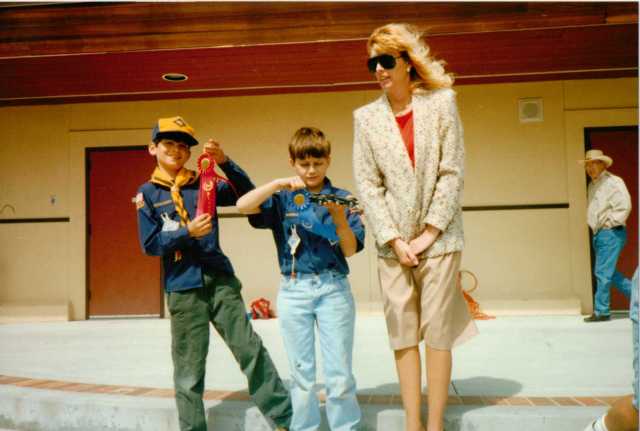 I’ll leave you to imagine the rest of the story as told by the others in the photograph (none of whom I know!) What’s for certain is that the boy next to Nicky, who was the favourite to win apparently, doesn’t seem too pleased with having come in second place.

But my boy is oh-so-pleased and his winning smile made this mama as happy as can be.

Sherri has published a collection of non-fiction articles in magazines, anthologies and online at her Summerhouse blog, and a memoir column at Carrot Ranch, an international online literary community. A keen walker and photographer from the UK, she raised her family in California for twenty years. Today, she lives in England’s West Country, hoping soon to publish her debut memoir.
View all posts by Sherri Matthews →
This entry was posted in Childhood Memories, Family Life, Weekly Photo Challenge and tagged Boy Scouts of America, Childhood memories, Cub Scouts, Family Life, Pinewood Derby, postaday, Scouting, Weekly Photo Challenge, Winning Smile. Bookmark the permalink.