Guest Post: Jennifer B. Graham Talks About The Birth Of Her Memoir

Today, I am delighted to welcome guest blogger Jennifer B Graham to talk about the birth of her memoir.  Here, in Jennifer’s own words: 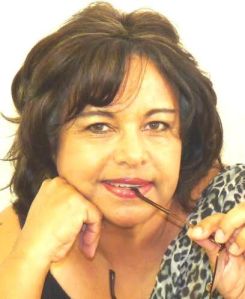 My memoir, An Immoral Proposal, started out as a novel. Its conception began in South Africa, as a forbidden, illegal love story played out against the backdrop of apartheid in 1974. I approached my story as a novel because it was emotionally the safest mode to go. I felt I, the narrator, could be invisible. I thought all I needed was a vivid imagination and it would be like playing with the paper dolls I created as a child – over a hundred of them – each with its own personality and history. I’d breathe life into them and simply take off from there.

Trouble is, my story is not a fantasy and facing the truth was simply too painful. So, in my re-ordered world, I set my family in a Pollyanna world with nice, clean characters.  But I wasn’t making any progress. It was like pushing a wheelbarrow of rocks uphill. The plot was garbled and the characters static and lifeless. Having no compass and not thinking clearly about what it was I really wanted to say I was more focussed on what I wanted to name the “baby” – “On the Other Side of the Fence.”

I came to the realisation my own story wasn’t one-dimensional but had multiple themes and working those out in a novel was a struggle. Along the way I changed the title to “Ham’s Daughter” that still did nothing for the book. The whole project limped along in fits and starts leaving me highly frustrated and dejected.

Emotionally, I wrestled with sensitive subject matters in parts of my story, leaving me exhausted and depressed. Over the years, I kept putting the project on the backburner while working through these emotions.  Just like you can’t force a butterfly from its chrysalis before it’s ready to hatch, you can’t rush the healing process. 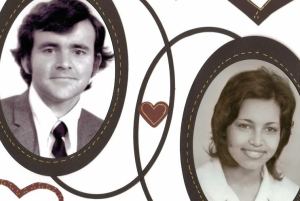 I carried this ‘baby’ with me from country to country – England first, then Canada and the United States – all places I had lived. From the US, I took it to the ends of the earth – New Zealand!

In ‘The Land of the Long Cloud’, I made another last ditch effort to get this thing going. I asked a publisher friend to cast a critical eye over my novel. We spent a weekend at fabulous Hanmer Springs, a spa town near Christchurch.  Her response was, “Do you have a thick skin?”  She put it to me as diplomatically and gently as she could. It stank!  Looking back, I’m embarrassed to have even given her the material.

I refer to her as my literary mid-wife who told me the ‘baby’ was breech. She turned it around by suggesting that I tell my story as a memoir. “But I thought memoirs were for important public figures,” I replied. Anyway, I took her advice and once I began writing in this genre, the words simply began to flow as I tapped into my wellspring of memories and experiences.

Some were extremely painful and embarrassing to drudge up, but it forced me to confront my fears against which I had well insulated myself with layers of protective walls. Breaking them down was excruciatingly painful at times, but I needed to set myself free and find my voice. 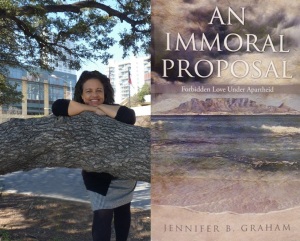 Three winters ago, I took my manuscript on vacation with me to the Dominican Republic where I made huge strides with it. It was there in the dreamy atmosphere of the Caribbean that the present title jumped off the page. After a twenty five year “pregnancy”, An Immoral Proposal was birthed on 9 November, 2013 and I’m pleased to say that although the mother is going nuts with the marketing minutia, the “baby” is growing quite well.

Here, Jennifer is interviewed about her memoir:

Jennifer is a self-proclaimed global nomad who began life in South Africa, left when she was nineteen and since then hasn’t looked back.  Over a forty year span she’s also lived in England, Canada, USA and New Zealand. After earning her degree in communication/print journalism from the University of Mobile, Alabama, USA in 2001, she wrote freelance feature articles on topics such as food, health, travel and profiles for miscellaneous publications that include Destinations, Connections, The Press, The Citizen, The Fairhope Courier as well as Triond.com.

Jennifer is a member of the Writers’ Community of Durham Region, in Toronto, Canada. An Immoral Proposal is her first book. She lives with her husband near Toronto. Her five grandchildren, split between Delaware and Saskatchewan, keep her wandering.

Blurb about An Immoral Proposal 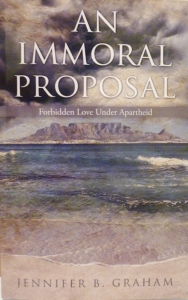 Picture this. She’s from a lower socio-economic family, left school at sixteen, works as clerk in a factory. He’s from an affluent background, private school education, university degree, member of exclusive social clubs, home in the leafy suburbs.

In her first memoir, Jennifer B. Graham takes an emotional journey back to her childhood in a hostile land that legally classified her as a “Coloured.” What’s the likelihood of their having a relationship: Intimacy? – Probably not. Physical? – For sure. But would it last? Not a chance. In fact, they’re courting danger. You see, she’s brown and he’s white. Big
problem. This is South Africa 1974, the height of apartheid.

An Immoral Proposal is available here:

Thank you so much Jennifer for sharing your incredibly inspiring and personal story with us here today, particularly for those of us who are struggling with our own memoirs.  As I labour my way through mine, I can only be encouraged to keep going in the knowledge that the ‘baby’ will indeed be ‘birthed’ in due time, despite the exhaustion and endless frustrations along the way.  I am sure that many others reading will join me in wishing you every well-deserved success.

Sherri is a writer with work published in print magazines, anthologies and online. As a young British mum of three, she emigrated to California and stayed for twenty years. Today she lives in England's West Country, a full-time carer within her family. Her current WIP after completing her memoir is a psychological thriller.
View all posts by Sherri Matthews →
This entry was posted in Guest Blogs and tagged Apartheid, Family Life, Guest Blog, Marriage, Memoir, Relationships, writing. Bookmark the permalink.

35 Responses to Guest Post: Jennifer B. Graham Talks About The Birth Of Her Memoir