A Walk With My Friend Oscar

Sometimes there is nothing better than a walk by the sea along a coastal path soaking up the spectacular views, especially when there is a comfortable bench on which to sit for a breather, while admiring said views.

Speaking of views, some of you may recognise the house in the top right of the above photograph as the home where Charlotte Rampling’s character – Jocelyn Knight – lived during the second series of Broadchurch which aired on British TV in January.  Here’s a close up:

But other times, you may just prefer to take your walk further inland around the magnificent grounds of a beautiful manor house; somewhere like Ston Easton Park for instance, which is exactly where hubby and I walked in March.

Ston Easton Park Hotel is situated in the Mendip area of Somerset,  not many miles south of Bristol and Bath. The Palladian Mansion itself rises up majestically from beautiful parklands which were designed by the celebrated 18th century landscape designer, Humphry Repton.  Once the home of the Hippisley family for centuries, Ston Easton is now a highly revered hotel and restaurant.

On the day of our walk, we had an unexpected walking buddy who, knowing the best places to walk like the back of his paw, happily led the way. 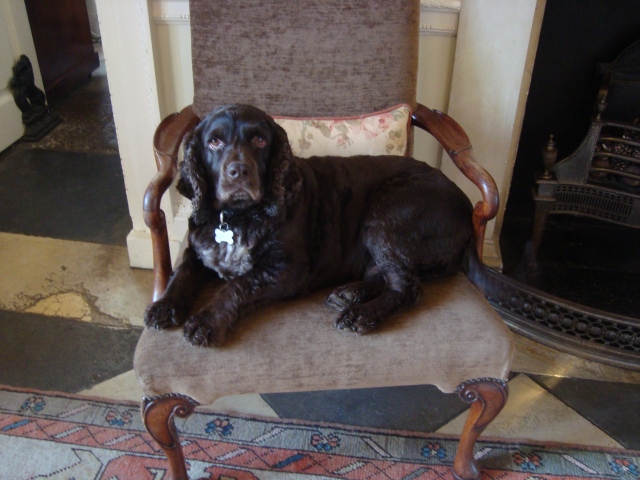 Isn’t he a beaut?

He knows the grounds inside and out and was more than a little keen to take us along a few of his favourite trails.

Just outside this greenhouse, Oscar’s ears pricked up upon hearing a rustle and he shot inside. 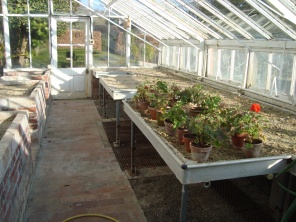 We followed, only to find these huge onions ~

A brief flurry of activity inside, and out shot a cat right in front of us, racing up the tree behind the greenhouse. Oscar gave fast chase, but was outrun and left to jump up at the tree while barking at the cat, who, of course, was not going anywhere by that point. 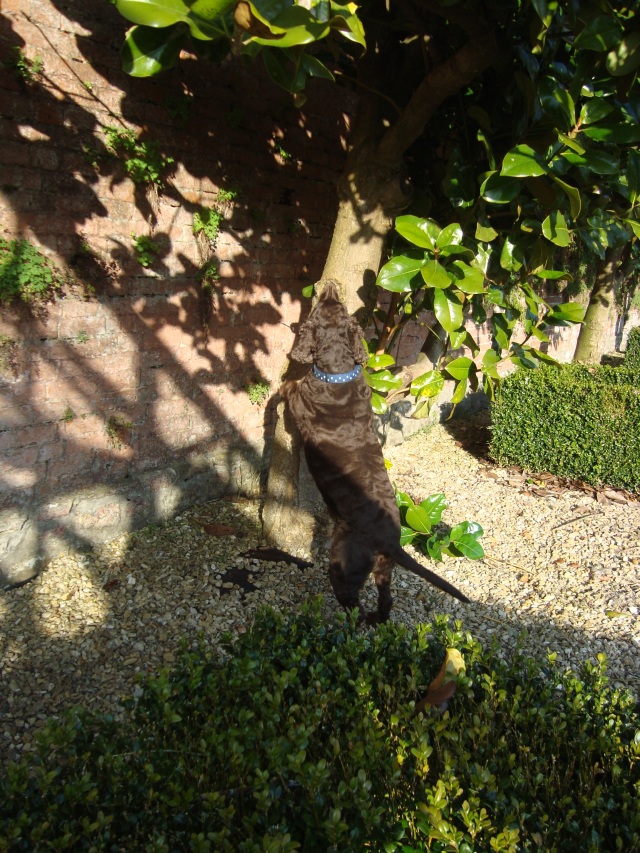 After that excitement, Oscar led us along a path giving us this wonderful view of the greenhouses and the kitchen gardens  ~ 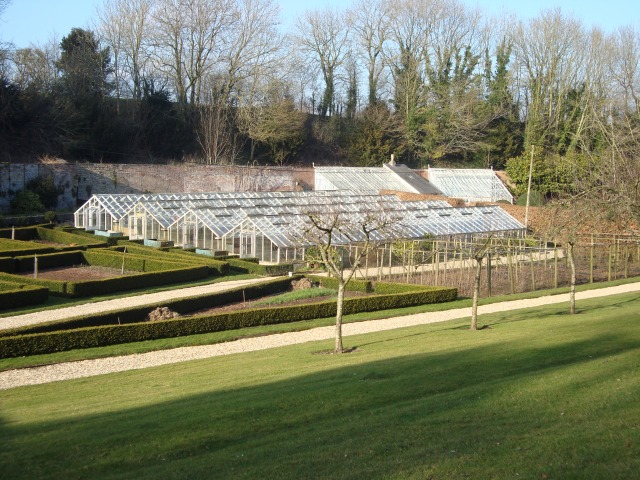 Ston Easton is a gourmet restaurant and grows all its own herbs and vegetables.  In March, there wasn’t much to see, but I hope to go back in the summer and see how different these kitchen gardens look.

Oscar continued to lead us down some interesting paths, stopping here and there to sniff for anything and everything ~

Including this bee hive which looked to need a little straightening ~ 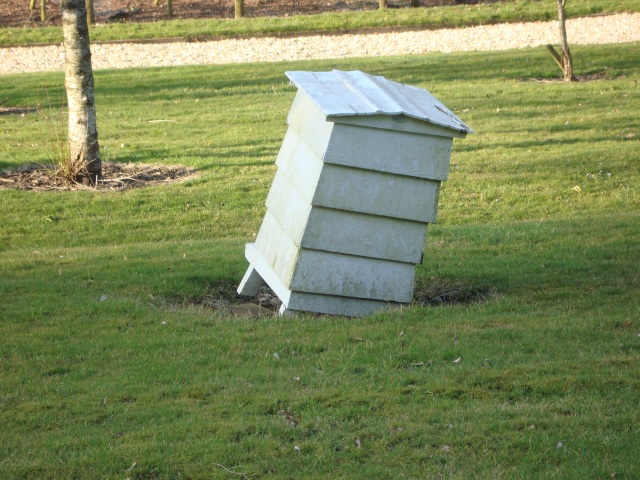 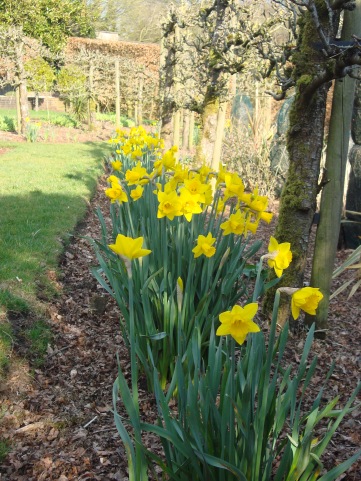 He was very keen to show us this pretty llittle bridge leading to a separate cottage where guests can stay if they wish to be away from the main house.  For a price, of course ~ 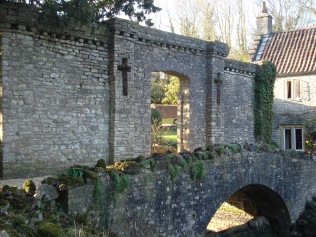 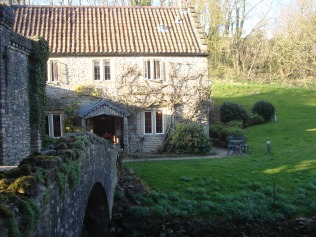 On the way back, Oscar took us along the back of the house, past another small bridge across the river and showed us the open fields ~

Towards the end of the walk, Oscar disappeared, but it turned out he had already beaten us home and was waiting for us by the front entrance as if to say, “What took you so long?”

Walking is a wonderfully healthy activity for mind, body and soul, but it’s important to bear in mind that no matter where we walk, we must always pay heed to this cardinal rule:

Litter or glitter, it’s never a good idea to leave it behind.

Thank you for joining me in this walk today, and thank you Oscar for leading the way.  You were the perfect host ~ 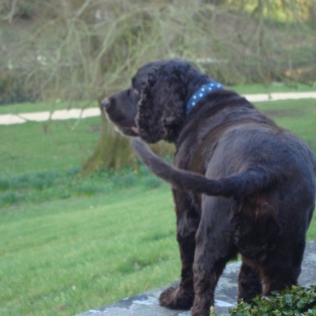 Me and my friend Oscar (c) Sherri Matthews April 2015

For more walks, be sure to check out Jo’s weekly Monday Walk series (today she takes us for an envigorating walk to see the daffodils in Farndale, Yorkshire) and for a unique and beautiful selection of bench photos, check out Jude’s Bench Series, which for this month is benches with a view.  But hurry, it changes at the end of the month!

Sherri has published a collection of non-fiction articles in magazines, anthologies and online at her Summerhouse blog, and a memoir column at Carrot Ranch, an international online literary community. A keen walker and photographer from the UK, she raised her family in California for twenty years. Today, she lives in England’s West Country, hoping soon to publish her debut memoir.
View all posts by Sherri Matthews →
This entry was posted in Travel, Walks and tagged Bench Series, Broadchurch, Cocker Spaniel, Dogs, English Spring, Gardens, Photos of English Countryside, Sea View, Ston Easton Park, travel, Walks, West Bay. Bookmark the permalink.

139 Responses to A Walk With My Friend Oscar