London Calling: The Kinks, A Sunny Afternoon And A Newborn Princess

On Saturday, I walked almost 17,000 steps for a total of 161 minutes, covering 12.06 km and burned 644 calories.  How do I know all this?  Because I have a handy-dandy ‘S Health’ Smartphone App that told me so.  Welcome to a day’s walking in London and proof of just how far that can take anyone.

London called this weekend and we answered, deciding to drive rather than take the train not least of all because it was a Bank Holiday, three-day weekend, and typically, Waterloo Station warned of ‘major, disruptive engineering works’.  No surprise there.

Driving through London on a Friday afternoon of a holiday weekend is definitely not for the faint hearted, but it turned out good for me as while hubby drove, I managed to snap a few photos en-route ~

One of the many things I love about London is the eclectic mix of historic and contemporary architecture.  For instance, as you cross the Thames on Millennium Bridge (completed on June 10, 2000), St Paul’s Cathedral stands majestically, ready to welcome you to the other side of the river ~

After the Great Fire of London in 1666 destroyed most of London,  Sir Christopher Wren began rebuilding St Paul’s with the first stone set on June 21, 1675, giving us the Cathedral admired by so many today ~ 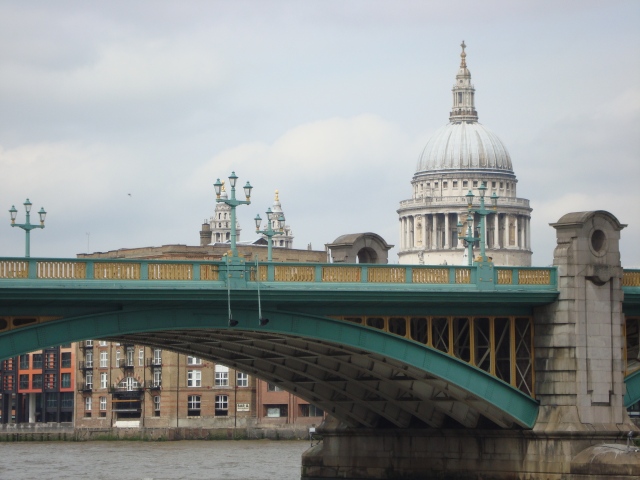 Iconic buildings stand side-by-side with towering, glass structures all along the Thames Embankment.  The Globe Theatre (built in 1997), which stands about 750 feet from the site of Shakespeare’s original theatre (built in 1599), shares views with The Gherkin (2004) and The Walkie Talkie building (2014).

View of The Walkie Talkie building

The Walkie Talkie building and The Gherkin, side by side

Not forgetting, of course, Tower Bridge ~ 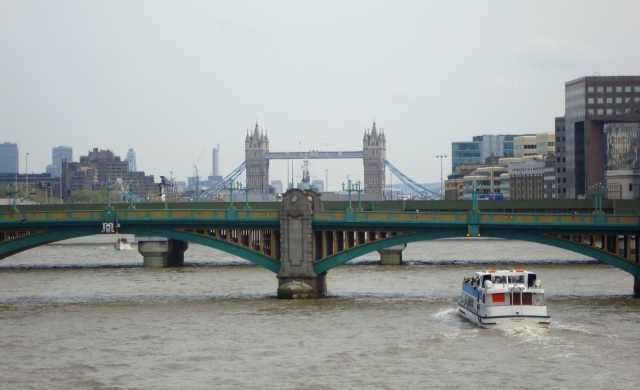 But dwarfing all these buildings, old and new, looms a gigantic glass tower which looks just like, well, a shard of glass about to give the sky a nasty scrape if you ask me.  No surprise that this building is named The Shard, after its looks, naturally ~

The Shard, built and completed in July, 2012, is a 308 meters high, 87-floor glass skyscraper with restaurants, offices, hotel and viewing platform. You can go all the way up to the top to the viewing platform if you are willing to pay £30 per person for the pleasure.

Needless to say, whilst I’m sure that the views of London are spectacular from up there, I stayed put and took these photos from the ground up ~ 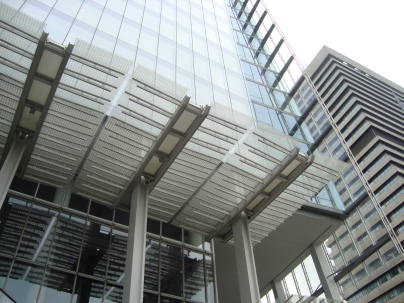 Borough Market, one of the oldest and largest food markets in London and just around the corner from The Shard, provided a veritable feast for the eyes if not for the stomach, although I probably wouldn’t have fancied much of anything if I had gone up to the viewing platform, not being one for heights.

As we wandered around the open-air market with Southwark Cathedral as the backdrop, news came in of the birth of Princess Charlotte Elizabeth Diana, although we didn’t know her name until the next day.   It was exciting to be in London, so close to St Mary’s hospital in Paddington where the Duchess of Cambridge had just given birth, for this historic moment.

I am fortunate to have visited London many times throughout my life, but I was living in California in 1981 when Princess Diana walked down the aisle of St Paul’s to marry Prince Charles, bucking the usual Royal trend of marrying at Westminster Abbey. Like millions of others, I stayed up all night to watch her wedding on television and then went on to work having had barely any sleep. But it was worth it.

And then, tragically, only 16 years later in 1997,  I watched her funeral on television from my home, once again in California.

But on Saturday, there I stood, in the heart of London as happy news rang out with celebration and joy for Prince William and the Duchess of Cambridge and their beautiful daughter who bears her grandmother, Princess Diana’s name.  How proud and thrilled Diana would have been…

A classic London Boozer – The Globe Tavern, built in 1872 – sits by the entrance to Borough Market.  It was used as the location for the 1992 film ‘Blue Ice’ starring Michael Caine and Bob Hoskins, as well as for ‘Bridget Jones’ Diary’ in 2001.

But our celebrations would have to wait until later. 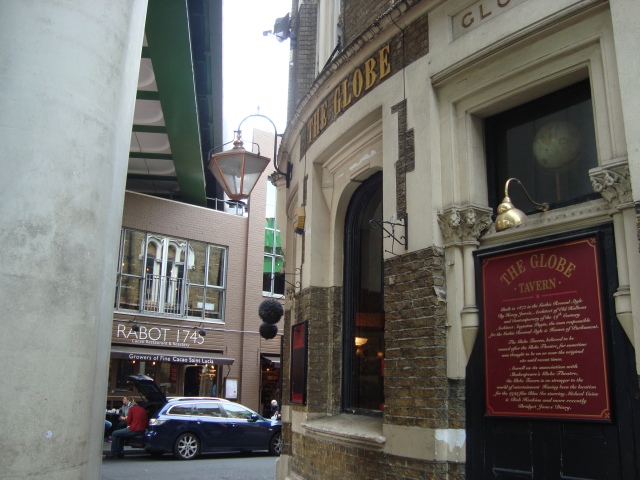 The weather cleared and sure enough, the skies parted, gracing us with a sunny afternoon.  And not just any ‘Sunny Afternoon‘, as this happens to be the name of the absolutely brilliant West End show featuring the story and the songs of the 60s London rock band ‘The Kinks’ and the reason for our visit to London.

Along with his Beatles collection, my dad had a few of The Kinks’ records. One 45 I especially remember playing when I stayed with him as a girl in the 70s during the school holidays (along with more than a few great memories of playing air guitar with him) was this, one of our all-time favourites ~

By the time the show ended and we poured out into the streets, the rain had begun to fall.  Great crowds surged towards The Piccadilly Underground, only to discover the entrance was cordoned off.  Police cars and an ambulance whizzed by, sirens screaming,  and for a brief moment I wondered if ‘something’ had happened, or was about to.

But all was well and eventually, back on the endless stream of escalators taking us ever deeper into the bowels of the London Underground system, we made our way back to our lodgings, safe and sound.

And now you know how I managed to walk so many steps on Saturday.  If only I could manage it every day.

With all that walking, I need to take some extra steps to get back on blogging track.  This will be tricky for me until next week for one reason or another, but as always, I’ll do my best to catch up with you all as soon as possible.  Meanwhile, thank you for bearing with me, your visits mean so much.

…And you all deserve a Sunny Afternoon…

Sherri's work is published in magazines, anthologies, her Summerhouse blog, and memoir column at Carrot Ranch, an online literary community. As a young mum of three, she emigrated from the UK to California and stayed for twenty years. Today she lives in England's West Country with her family and two beautiful black kitties. A keen walker and photographer, she is working hard on her memoir. Her 2021 entry to Fish Publishing Short Memoir Prize was shortlisted and also received a special mention at Spread the Word Life Writing Prize.
View all posts by Sherri Matthews →
This entry was posted in Family Memoirs, HIstory, Travel and tagged Family Memoirs, HIstory, London, music, Photos of London, Princess Charlotte, Princess Diana, St Paul's Cathedral, Sunny Afternoon, The Kinks, The Shard, travel. Bookmark the permalink.

120 Responses to London Calling: The Kinks, A Sunny Afternoon And A Newborn Princess