Bring on the Cats

Posted on February 7, 2013 by Sherri Matthews

Well, it had to happen sooner or later, I did warn you! Having shared in my previous post what joy can be found in the simple things of life, especially in nature and wildlife (namely, Sweet Robin!), I think this would be a good time to introduce our two cats (although, of course, cats are far from simple and they aren’t exactly wildlife, but they do bring us immense joy – for the most part anyway).  As one of my sons once said: “We get fifty percent of our laughs from the cats!”  Whether that means laughing with them or laughing at them, well, all you cat lovers out there know that they can do the craziest things at times…

We’ve always had kittens and cats.  My mum bred Siamese cats when I was growing up and she and my dad once ran a cattery business from our home for boarding cats. When my own children were growing up, as well as cats we had dogs, fish, birds, rats, hamsters, one mouse, a box turtle, terrapins and now a corn snake.   They were/are all special in their unique way (although we have had a few, how-shall-I-say, mishaps along the way, say no more) but there is one extra-special cat who was adored by the children and it started like this:

One hot, Californian summer’s day, when my oldest son was five years old, we drove miles to look at an old car with a view to possibly buying it.  The first thing we noticed when we arrived, however,  was not the car but the numerous cats and kittens running around all over the place. Turned out that the lady who owned the car also rescued cats, lots of cats.  You can be sure that the entire time we were talking to her about the car, my son was kneeling down in the grass nearby lost in delighted play amongst a sea of kitties and in particular, a little black fur-ball of a kitten who had, quite naturally, instantly bonded with him. For life.

Forget the car, it was a clunker.  We came home with that little black fur-ball instead and called her Willow.

I’ve written an article entitled ‘Cats Happy Reunion’ which is soon to be published in ‘Your Cat’ magazine. It briefly tells the story of Willow and Maisy (who we adopted from a cat shelter several years after getting Willow) and their long journey across the Atlantic.  In 2003, my children and I had to leave California (sadly, my ex-husband and I split up) and move back to the UK. But not without our two cats! 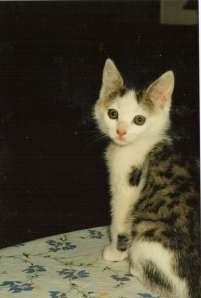 Sadly, we no longer have Willow with us but we do still have Maisy, now almost 11 years old, and our ‘Boy’ (real name Eddie), who we acquired thanks to a ‘kittens for sale’ ad in our local paper  almost 7 years ago.  Maisy still retains somewhat of an American accent (although we say she looks more like a French model with her high cheekbones and amazing almond-shaped eyes).  Eddie, on the other hand, has a distinctive West-Country twang to his meow, having been born on a farm in the wilds of Dorset, brought up on fresh rabbit and pretty much left to his own devices with his naughty brothers and sisters to run around as they pleased.

These two cats of ours get on very well for the most part although Eddie is a bit of a bruiser at times and seems to enjoy leaping on Maisy when he wants to play but she just wants to enjoy a lazy cat nap. Consequently, after a few growls, hisses and several clumps of fur literally flying, she runs off and Eddie ends up taking her nice, warm spot. He looks a bit perplexed at first and sometimes calls out after her with a rather sad lament… ‘yeoooow, yeooow’.  He recovers very quickly, however, gives us a look as it to say, “what?” and  then curls up and falls contendly asleep.  Conscience clean.

Eddie is also the king of comfort and certainly no fool.  When he hears the soft click, click, click of the central heating boiler as it fires up, he knows this means that the radiator in the kitchen is very soon going to be very warm and he knows just what to do…

Sherri is a writer with work published in print magazines, anthologies and online. As a young British mum of three, she emigrated to California and stayed for twenty years. Today she lives in England's West Country, a full-time carer within her family. Her current WIP after completing her memoir is a psychological thriller.
View all posts by Sherri Matthews →
This entry was posted in CATalogue and tagged America, California, cat photo, cats, Children, England, joy, kittens, laughter, Photos. Bookmark the permalink.

14 Responses to Bring on the Cats