It’s been bad. It’s heavy. Bring on whatever it has to be, I can take it, but please don’t let my daughter suffer.  There is nothing worse than watching your children go through the hell of despair.

Today I wanted to write a light-hearted post about the birds visiting my garden, about my cats, about the lovely rain and the sunshine, but I cannot.  The words evade me.  I am lost inside a murky shadowland, staggering about looking for some kind of light, any kind of light.

My daughter suffers, entrapped in a world of isolation, hopelessness and yes, rage, that only someone with Aspergers can understand.  I am her mother and I think I understand, but I don’t, not really, though Lord above, how I try.

I try to explain to people what it really means for her to have Aspergers.  Yes, she went to school, gained a handful of reasonable GCSEs (although failing maths because we now know that she also has dyscalculia, the numbers form of dyslexia, but this was never picked up during her school years) and by no small miracle she gained her BTEC in Art & Design at our local sixth-form college. She used to be able to catch the bus, go to the cinema with her then-boyfriend and meet up with other friends now and then.

But behind closed doors, I witnessed the horrendous toll that every day life was taking on her.  The mental torture that she was put through every she time she did those things and  the toll this took on her physically. Each day  it became harder and harder and she coped less and less. In the mornings I would awake to find notes which she had pinned up on her bedroom door, letters written to me begging me not to send her to school.  Day in, day out, then weeks, months and years.

She was besieged by a mental anguish that seemed to suck the very life out of her.  I witnessed it every day.  Nobody knew what to do.  I made numerous calls to the school, took her to the doctor, talked to her teachers.  Nobody listened.

Then, one day, when she was 18, it all just collapsed and she simply was not able to do these things any longer.

A counsellor blamed it on me and her father for getting divorced.  My daughter was furious.  It took one year of repeatedly trying to get a referral from our GP before we were taken seriously and at last she got her referral which set her on the path towards receiving the correct diagnosis.

Why didn’t my daughter ever raise her hand in class every single one of her teachers wanted to know.  Why didn’t she participate, or join any after-school clubs, or take part in sports?  Yet not one teacher from Kindergarten to high school ever raised any concerns that she might need professional intervention. Instead, they labelled her as shy.

When she was little she would go to parties and even sleepovers sometimes but I would see the abject relief on her little face when she was back home again, safe and secure within the comfort and familiarity of her home and family.

When she attended pre-school two mornings a week from the age of four I worried slightly when she seemed always to be alone in the corner of the room when I would go and pick her up.  All the other children were playing happily, laughing, holding hands and going home together on play dates.  But my daughter was obsessed with a plastic sandwich and told me she was happy playing alone with it.  I quietly expressed my slight concerns to the teacher but she laughed it off, telling me that my daughter was ‘a delight’ and that everything was ‘perfectly fine’.

Once, when she was seven years old and in second grade, my daughter’s class performed a song for their parents.  The children sat outside on bleachers in rows singing their hearts out and my daughter sat the end of her row, two of her friends the other side of her.  At the end of the song the children had to hug each other, it being all about friendship.  Her two friends hugged each other and my daughter was left along to hug herself.  I watched this and the pain couldn’t have been any worse if somebody had stuck a red-hot knife in my chest.

I hated those girls at that moment for what they did.  My own sense of rejection exploded in my brain and I was devastated but my daughter seemed not bothered by it. I don’t think she even noticed.

She told me once that when she was in Kindergarten a boy, seeing she was alone in the playground, came over to ask her to play with him. She told him to ‘scram’  because she didn’t want to play with him at that precise moment and she was quite happy as she was.  So much for  being shy.

She had friends, however, and she was a good friend back  Other children seemed to gravitate towards her when she was little and I’ve come to learn that this is quite common, but as ‘Aspies’ grow up it becomes much harder for them to make friends. I noticed that other children often took advantage of her and left her out of things. A host of misunderstood difficulties with communication and social interaction escalated, bringing with them their partners in crime – rejection, isolation and then the crushing loneliness.

Talking recently with my daughter about those awful school days I learnt for the first time the extent of what it was really like for her.  I asked her why none of her teachers had ever shown any concern for her or alerted us to the fact that just maybe she needed some help.

She told me that because she was never violent or ‘acted up’ she fell far below the radar.  She told me that she and another friend had frequently ‘cut class’ by hiding out in the toilets. “Didn’t any of the teachers ever notice?” I asked, shocked.  I was certainly never once called about any of this.  I was horrified to learn that my daughter could have been anywhere and nobody knew about it.

Her answer? “It was because I was invisible.“

She wants to be like other people, she wants to go out and do the same things that her peers can.  She is enraged that she cannot.  She will celebrate her 21st birthday this year, yet she feels that there is no hope for her ever living a normal life. She feels that she has missed out on numerous opportunities, that life is leaving her behind. The rage and anger at the injustice of all this is one of the biggest challenges for people with Asperger’s.

When she was at long last diagnosed two years ago I thought ‘Halleluia’ , now we can get her the proper, professional support and help. It has not been that simple. For two years since her diagnosis I have fought and fought to get her the proper assessments.

My daughter has since become completely socially avoidant.  If something causes you immense pain and anxiety then you avoid it, right?

In my search for ways to better explain just what this is like,  I came across this Goodreads quote by Dr Shana Nichols taken from Liane Holliday Willey’s book, ‘Safety Skills for Asperger Women: How to Save a Perfectly Good Female Life‘*:

“Females with ASDs often develop ‘coping mechanisms’ that can cover up the intrinsic difficulties they experience. They may mimic their peers, watch from the sidelines, use their intellect to figure out the best ways to remain undetected, and they will study, practice, and learn appropriate approaches to social situations. Sounds easy enough, but in fact these strategies take a lot of work and can more often than not lead to exhaustion, withdrawal, anxiety, selective mutism, and depression. -Dr. Shana Nichols”

Our journey takes us down a path overgrown with sharp brambles and briars with thorns which pierce and cut us.  We trample on them and cut them down with our bare hands as we push our way through, bleeding and broken, but they keep growing back, ensnaring us and pulling us back down to the ground.  Yet I am confident that somewhere beneath all this there lies a new path, a clear path, a way out of the shadowland. I will not give up.

Take my hand my daughter, I will never leave your side.  Together, and with God’s strength and guidance, we will find your way.

Then hush, there it is! Through the fog of this shadowland I catch a glimpse of my little girl.  I am waiting in the car in the church car park one warm evening as I see her come skipping out from her Awana’s class, smiling from ear to ear as she catches sight of me waving to her.  Her plaited hair dancing behind her as she runs over to me, her little froggie bible bag swinging from her hand.  She is 8 years old and she is free and happy and completely innocent of the troubles to come. This is what I remember, forever imprinted on my heart.

You are not invisible any longer, my darling girl. 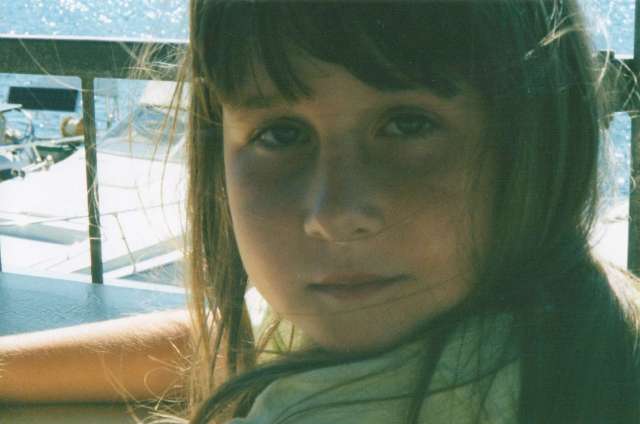 Sherri has published a collection of non-fiction articles in magazines, anthologies and online at her blog, diverse guest features and a memoir column at Carrot Ranch, an international online literary community. A keen walker and photographer from the UK, Sherri raised her family in California for twenty years. She has worked in the legal and medical fields and is now carer and advocate to her youngest on the autistic spectrum. Today Sherri lives in England's West Country not far from the sea, hard at work on final edits of her debut memoir.
View all posts by Sherri Matthews →
This entry was posted in Asperger's Syndrome, Childhood Memories, Family Life and tagged Asperger's Syndrome, Autisim, Children, Church, daughters, Family Llife, God, hopelessness, Litttle Girl, loss, mothers, pain, School. Bookmark the permalink.