Posted on September 9, 2013 by Sherri Matthews 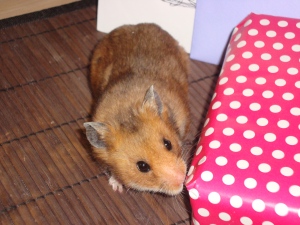 Poor Eric the hamster has gone, flown off to Hamster Heaven he has.  I didn’t think he looked very good a couple of  nights ago, not very lively.   Having owned several hamsters over the years, we can always tell when they are starting to age as their faces start to look a bit ‘old horse-ish’.  As in long, narrow and a bit bony.  Well, Eric definitely had the ‘old horse-ish’ look about him for some weeks. He just wasn’t himself.

Out of all the hamsters we have had, and we’ve had a few, I have to say that I think Eric was my personal favourite.  He was the only one I felt comfortable holding, he never bit me, never peed on me and would sit up in my hands, brushing his sweet little paws over his ears and face as he cleaned himself.  Everybody say ‘Ahhh’…

A bit different to the first hamster we had, my eldest son’s first.  He decided to name him ‘Lemmy’.  This was in honour of the lead singer of the heavy metal band Motorhead.  His Dad’s influence, don’t ask. Lemmy was a bit rough and ready, liked a bit of head banging, except he couldn’t sing.

(Just to clarify, I am talking about the hamster here and any comparisons made with the ‘real’ Lemmy are completely unintentional.)

Lemmy kept escaping and I discovered that he had made a little bed at the bottom of my son’s duvet by ripping a corner of it into lovely shreds.  Bending down to pick him up after one such excursion, as I reached down to grab him from between the wall and the bed, he rose up, hissed up me and planted his very sharp front tooth into my finger.  I didn’t like Lemmy.

After that, having spent years begging me for a pet rat and then pursuading me to get one (you know my feelings about rats from my previous post) I agreed to let him give it a try.

Well, I have to say, he did his homework and pet rats are very intelligent, clean and friendly pets. Just don’t get them near me.  However, the first pet rat proved to be a bit of a disaster.  My son adored the film ‘Jurassic Park‘ and so, it was only natural that he named his rat ‘Raptor’.  Well, he lived up to his name alright. This thing was vicious and nobody could handle it.

Back to the pet shop went Raptor.

He was replaced with a lovely ‘Blue’ rat called, well, Blue and my younger son, not to be left out, acquired Snowy.  Snowy was white, naturally.  I did grow to love their sweet little eyes and faces but couldn’t stand their tales.   The kids were constantly hounding me to try, just once, to handle their beloved pet rats but I just didn’t have it in me.

My dear readers, you feel my pain, don’t you??

Then my daughter finally got her very own pet hamster.  A sweet little Teddy Bear Hamster (so called because of the shape of the ears, like a Teddie Bear’s) called Blackie.   You don’t have to guess the colour of this one. (The names became more inventive over the years I might add). The next hamster was called Puddles (because he peed everywhere whenever he was out of his cage) and then there was Negi.

Aspie Daughter was going through her Japanese Manga and Anime stage at the time.  Poor Negi.   He only lasted 6 months.  One day he didn’t come out of his toadstool house and well, that was it.  Daughter was away at the time visiting her Dad.  Great.

A few years went by before she decided to replace him and that’s where Eric came in.

So here we are.  Once again, hamster-less.    I do feel quite sad, I admit.  I’ll miss the sounds of Eric’s little wheel going round and round endlessly, night after night.  Well, perhaps not that part.  Isn’t it crazy how even just a tiny hamster becomes part of the family? I’ve had a long chat with the cats and told them both that they have to make sure to live  extraordinarilly long lives. They have promised they will do their very best. 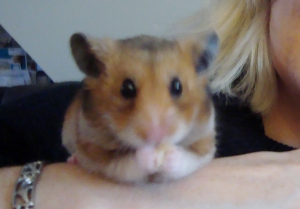 Poor little Eric will be buried in the back garden.  As we take the time for a few moments of quiet reflection on Eric’s short but sweet life, I will remember another Eric, the slightly more famous comedian, Eric Sykes,who took part in a live tribute to the incomparable Spike Milligan, on whose gravestone  is written this enduring epitaph:

Goodbye Eric, we will miss you.

26 Responses to Alas, Poor Eric, I knew Him Well