The Island of Spinalonga

On this blisteringly hot summer’s day here in the British Isles, I think of another island, far away but even hotter than this: I think of the Greek island of Crete, an island surrounded by the Mediterranean and Aegean diamond-studded seas and filled with the warmth and hospitality of its people. 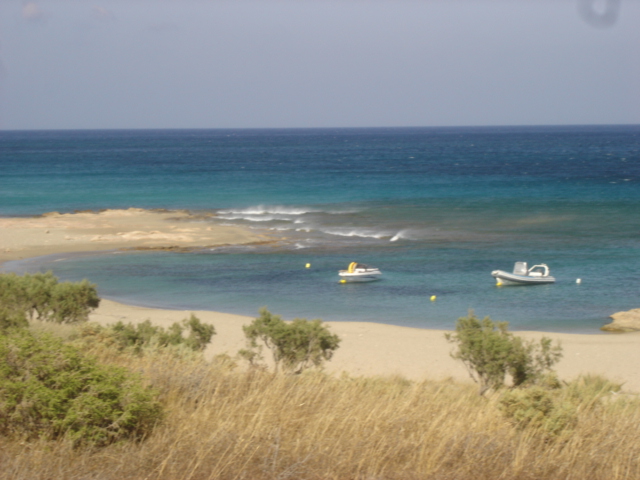 The Greeks don’t believe in eating without drinking: you find a brightly painted, wooden table and chairs placed invitingly on the beach beneath the shade of a tree.

There you sit, hot, hungry and thirsty and the next thing you know, along with your chilled drink while awaiting your ordered meal, your waiter brings you a bowl overflowing with the plumpest, richest tomatoes you have ever seen.  Or maybe chickpeas and fresh yoghurt.

A snack , a meze, to have with your drink, no extra charge. 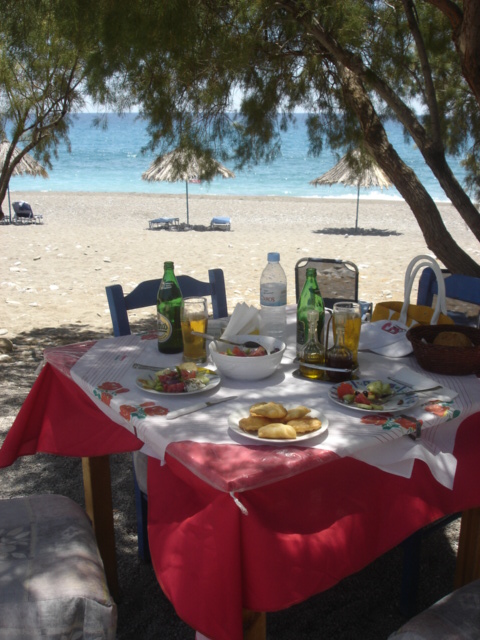 In a hurry to pay your bill?  A word of advice: never be in a hurry when you go on holiday to Crete because you won’t be allowed to mention that dirty word over there.  You will be told to relax and to take your time.  An alien concept to so many of us.

While you wait for your bill, allow another half an hour or so to enjoy the chilled bowl of dark red cherries served on ice, or the sliced watermelon that accompanies your bill.

After this long, lazy lunch you might find yourself strolling through the pleasant harbour town of Agios Nikolaos, nestled cozily alongside beautiful Mirabello Bay on the north-eastern shores of Crete. 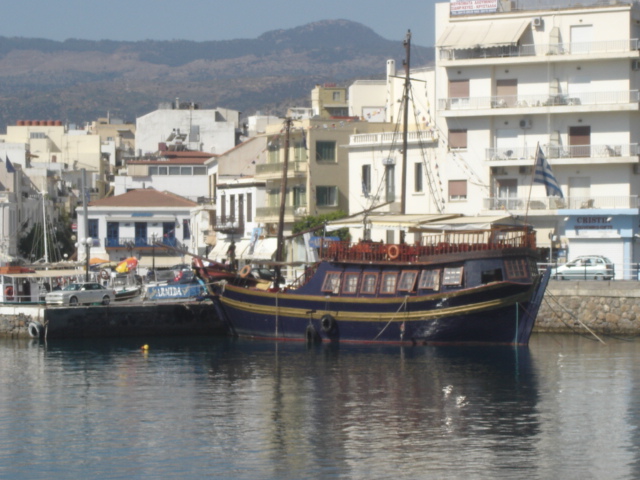 As you approach the fisherman and their boats you will stop to catch your breath as you view the magnificent sight of a peninsular just across what is known as the Gulf of Elounda.

This, you soon discover, is the rocky and barren island of Spinalonga. 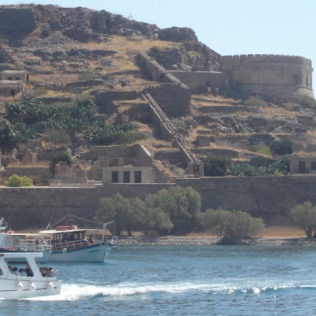 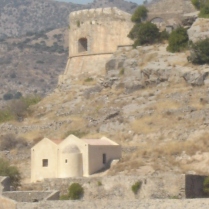 What you first notice jutting out from the peninsular is the Venetian fortress which was originally built in 1579 to protect the nearby port of Elounda.

You come to learn some of this island’s history: in 1715, the last of the Venetians were removed when the Ottoman Turks took over. During the Cretan revolt of 1878, the island became a home for the remaining Ottoman families who sought refuge there, fearing Christian reprisals.

What you then learn is at that after the last of the Turks left the island in 1903, it was turned into a leper colony. The conditions were prison-like, cruel and unforgiving.

Things improved when a hospital was built at last in 1937, but it was another twenty years before the colony was closed and the last surviving lepers were taken to a hospital in Athens. The last person to leave the island was a Priest, who left in 1962.

The island today is uninhabited, its fortress and town in ruins.

Of course, it begs exploration.  Local fisherman run boats daily from both Agios Nikolaos and Elounda to Spinalonga enabling you to head over there and spend as long as you need to before you catch the last boat back.

One of the first sights to steal your gaze is what is known as Dante’s Gate.  This is where the lepers entered when they were first brought to live on the island: it seems to exude sorrow and despair as the place where the lepers said goodbye to their loved ones, never to return.

None of the lepers knew what was going to happen to them.  They were looked after with food, water and medical supplies, but they never lived with their families again.  It was at least better than the caves which were once their homes.

Evidence of an entire community, once living and breathing, is still clearly visible; from ovens to staircases, homes and the hospital: 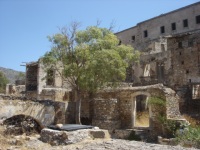 The view from the top is spectacular.  I imagine what it must have been like for the lepers to have looked longingly across the sparkling sea to the mainland where their loved ones  lived, knowing that they would never be able to join them again for the rest of their lives. 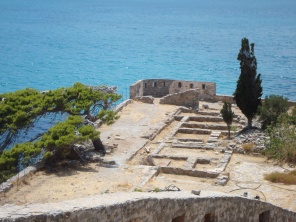 Walking along the dry, dusty trails, you will come across this Church sign. Nearby, lies the barely noticeable cemetery. 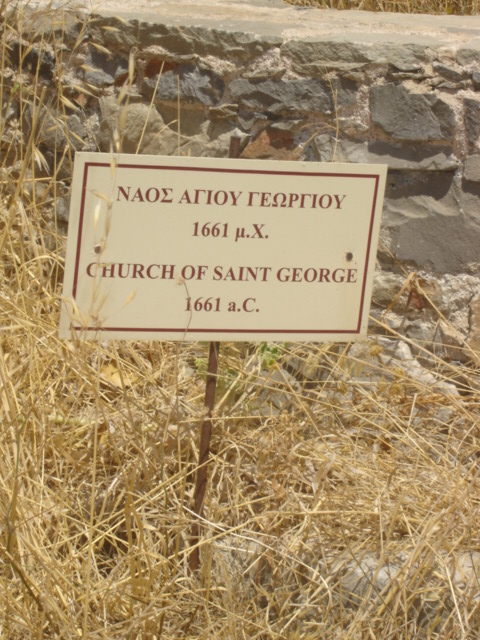 The Church just ahead was used for funerals.  It is tiny and sparse, barren in its surroundings.  The silence is melancholy, pierced only by the cry of a gull swooping overhead and the soft clacking of a stone as it falls away beneath your tread, knocking into other stones.

As you trail away from the beaten path and climb ever higher, you will find a place of solitude.  Lost in quiet thought, you feel nothing but a breath of hot air gently brushing your face as you listen to the sea lapping at the rocky shore below.

It is there that you might just find a moment’s peace wrapped up in a long-ago silence.

Yet, if you really listen you may hear the whisper of the voices of those who once lived on this island, carried along in the sea-breeze not as the cry of the seagull but as distant cries of those who were lost and lonely, longing for their families.

For there are those who remain on the island, whispering to our hearts from their eternal rest: as they walk softly in the shadows alongside us who visit, unseen but sensed, we are reminded by them of what is most important: that our lives are forever entwined and will never be forgotten.

This post is partly in response to the prompt of ‘Relic’ from last week’s Weekly Photo Challenge as well as this week’s prompt which is ‘Containers‘.  The island contains the abandoned relics of an old leper colony. I thought this would be the perfect excuse to write about this enthralling and fascinating island.

While bringing her memoir, 'Stranger in a White Dress: A True Story of Broken Dreams, Being Brave and Beginning Again' to publication, Sherri's articles, short memoir, personal essays, poetry and flash fiction are published in national magazines, anthologies and online. She invites her readers to share the view at her Summerhouse blog and is a regular contributer and columnist at 'Carrot Ranch', an online literary community. In another life, Sherri lived in California for twenty years, but today, she lives in England writing stories from the past, making sense of today and giving hope for tomorrow.
View all posts by Sherri Matthews →
This entry was posted in HIstory, Photos, Travel, Weekly Photo Challenge and tagged Crete, Greece, HIstory, Island, Mediterranean Sea, postaday, Relics, Spinalonga, travel, Travel Writing, Weekly Photo Challenge. Bookmark the permalink.

74 Responses to The Island of Spinalonga