Posted on September 15, 2014 by Sherri Matthews

We thought we had a poltergeist in our home a few years ago.

My aspie daughter (lover of all creatures bright and beautiful and the more unusual the better) had wanted to own a pet snake ever since she was a little girl.    We had the usual menagerie – dogs, cats, hamsters, rats, fish, lizards, ducks, chickens, birds, a box-turtle and even a fire-bellied toad called Longlegs – but the one pet my daughter really wanted was a snake.

She begged me on and off for years but I was extremely loathe to let her have one in the house, not only for practical reasons (what if the cats got to it, for instance) but because, sorry to say, I really can’t bear them.

I felt this way about pet rats and the boys had to work on me for years before I relented.  This is because I grew up in the Suffolk countryside and the only rats I knew were vermin the size of small dogs with teeth that would put you in the hospital with the black plague should one ever care to bite you.

I’ll give the kids their due though, when they set their little hearts on something, they did their homework, presenting me with all the facts and figures explaining how they would look after their rats, how clean/friendly/intelligent they were and what great pets they made.  They presented their persuasive arguments so well I’m surprised they aren’t lawyers by now.

So relent I did and I have to say, over the years, I did grow rather fond of Blue and Snowy and their sweet little faces.  It was their tails I couldn’t abide… 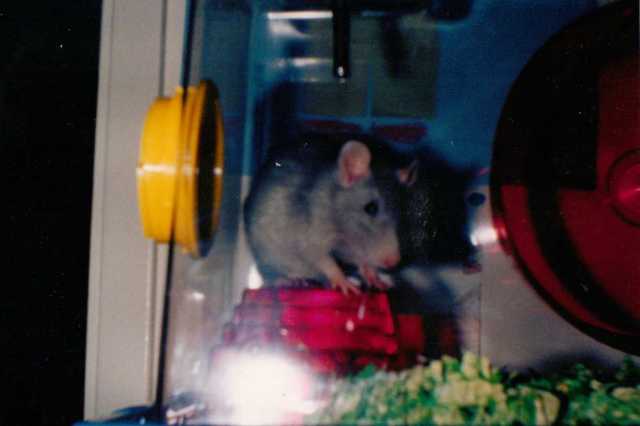 So it was that my daughter managed to persuade me in much the same way by blinding me with her heavily researched and impressive knowledge of snake ownership and assuring me that she wanted a corn snake, which is harmless, non-venomous and small, as far as snakes go.

Welcome Charles P. Snake, fondly known as Charlie.  Now, I admit, as much as the kids loved Charlie and enjoyed letting him wrap himself around their necks, arms and torsos, I am afraid that I couldn’t bring myself to do more than touch the top of his little head with the tip of my index finger.  That was as much as I could manage, bless him…

Charlie settled down into his new surroundings (a vivarium, which fit nicely in the corner of her room upstairs, far away from me…) and seemed happy and healthy.  Even the cats, when their curiousity and crafty attempts to bat at the glass windows of the vivarium to get him to do something, anything failed, soon became bored and left him alone.

Then came the ghostly happenings in my daughter’s room.  First, her bedside lamp had moved in the night and then she started to hear odd rustling sounds.  Her nerves a little on edge as it was, she was really scared when in the small hours, she felt a ‘presence’ on her bed as her sheets seemed to move of their own accord.

Convinced that she was the subject of a supernatural visitation, she hardly dared look but found no logical explanation  as to the origin of these spooky events.

Until, that is, the next morning when she made a startling discovery – the sliding window to Charlie’s vivarium was slightly ajar and to her horror, when she looked inside, it was empty.  Charlie had disappeared, into thin air.   Now, to her credit, she didn’t tell me any of this until after the fact.  I had to laugh when, in gleefully telling the story to her grandmother, I heard her say:

“I knew then that it was Charlie who was making all the strange sounds and movements in my room but I didn’t dare tell Mom that he had escaped or she would have lost her mind!”

Well, I would have lost something, probably my life, if that snake had crawled on my bed in the dead of night, or worse, inside the bed.  I can’t even imagine what I would have done if I’d known that a snake was loose in the house and couldn’t be found.

Thankfully, there is a happy ending:  my daughter, desperate to find her beloved snake, eventually did so – curled up sound asleep inside one of her shoes at the foot of her bed as if nothing had happened.

After that, Charlie didn’t escape again and my daughter didn’t have to worry about me ‘losing my mind’.  At least, not over that…and he brought great joy to her and those who are partial to snakes.

But sadly, Charlie has now slithered off into the great snake unknown where he can hiss to his little heart’s delight for he is no more.  He will never again shed his slippery skin and he has eaten his last supper.  We have to say goodbye to Charlie and my daughter is sad for her loss.

But she still has her African land snail. His name is Vladimir and he will now move into Charlie’s old vivarium now that it’s been cleaned out and filled with a few inches of lovely fresh soil for him to burrow into, as snails do, apparently.

He is quite different to the snails that have eaten their way through my garden this summer, so I’m told.  I do hope so but at least I have the comfort in knowing that should he escape, he won’t get very far.  The cats aren’t the slightest bit interested, which is good.

Charlie left his mark on this family, no doubt about it.  His spooky trail of mischief during his adventure of a lifetime will never be forgotten, a fond memory amongst those of all the beloved pets we have lost over the years.

I would though like to think of one final twist in the tail of this story: Charlie was not just any run-of-the-mill corn snake – due to his unusual markings and colourings, he was what is known as a ‘Ghost Corn Snake’.

It’s nice then to know that Charles P. Snake lived up to his name
in word as well as in deed.

Goodbye Charlie, it was nice knowing you.

Sherri is a writer with work published in print magazines, anthologies and online. As a young British mum of three, she emigrated to California and stayed for twenty years. Today she lives in England's West Country, a full-time carer within her family. Her current WIP after completing her memoir is a psychological thriller.
View all posts by Sherri Matthews →
This entry was posted in Asperger's Syndrome, Family Life, Pets and tagged African Land Snail, Asperger's Syndrome, Corn Snake, Exotic Pets, Family Life, Ghost Corn Snake, Loss of a Pet, Pet Ownership, Pet Rats, Pets, Supernatural. Bookmark the permalink.

73 Responses to The Sad Demise of Charles P. Snake