Flash Fiction: No Way Out Part Four: The Grave

It’s Tuesday, flash fiction time over at Carrot Ranch, which means more of Bill here at the Summerhouse.   But before I go, can I just say a huge thank you to those of you who have shown such an interest in this ongoing story.  This is all so new to me but I’m really enjoying the challenge and hope you will too.

But first, I would like to show you around a churchyard in the beautiful small market town of Sherborne, Dorset.

Charli’s flash fiction prompt this week is to write a creepy story in 99 words that has some connection to a cemetery.  Since I’m still writing Bill’s story, my flash will be ‘creepy’ but in a different way.

These photos aren’t creepy, but they do capture a churchyard filled with peace and calm on a glorious, October afternoon.

When I first met hubby, he enjoyed working as a stonemason at the weekends.  During their breaks, he and his friend often found themselves of a Saturday afternoon sharing sandwiches and drinking tea out of flasks while sitting on the wall of a cemetery deep in the Somerset countryside. 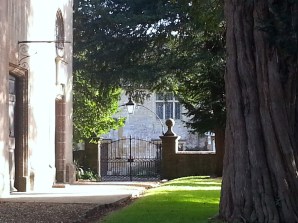 Views through the gate from both sides

Sometimes they worked on until well after sunset in the summer months, ‘fixing’ and repairing gravestones as well as setting new ones.  In my dark imagination, I conjured them up as a modern-day Burke and Hare lurking about the place with only the pale moonlight to guide their sinister steps.

Part of their job was to clean up old gravestones. Hubby, being the artistic one, set to work carefully and respectfully engraving names and dates of beloved family members long gone but not forgotten.

(c) Sherri Matthews 2014  These gravestones are so old that no names can be read.

One of the first things hubby did when I met him was to take me to a tiny churchyard somewhere in the wilds of Dorset and show me the gravestones of his maternal grandparents, buried side by side.  He was so proud to have been able to clean up their stones and re-do their engravings.  I thought it was the most romantic thing he could have done. 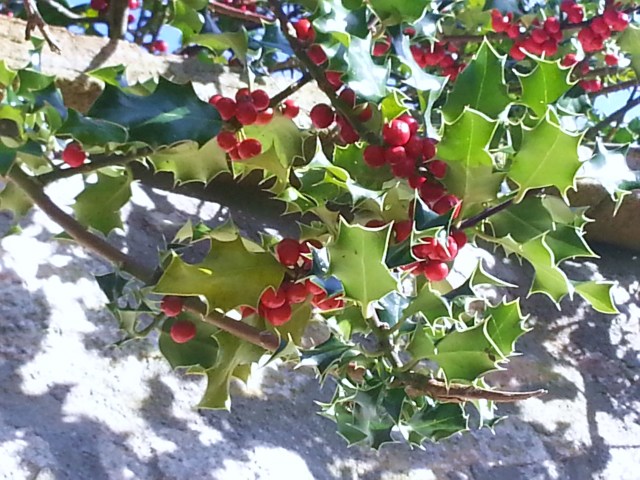 Holly growing along the wall. A sign that winter is on its way?
(c) Sherri Matthews 2014

We love walking around old churches and their grounds when we get the opportunity.  Every name and every date on the gravestones tell a story, steeped in history as are the churches themselves.

On sunny afternoons such as these, beams of sunlight illuminate the warm stone inside the church through the leaded-light windows: 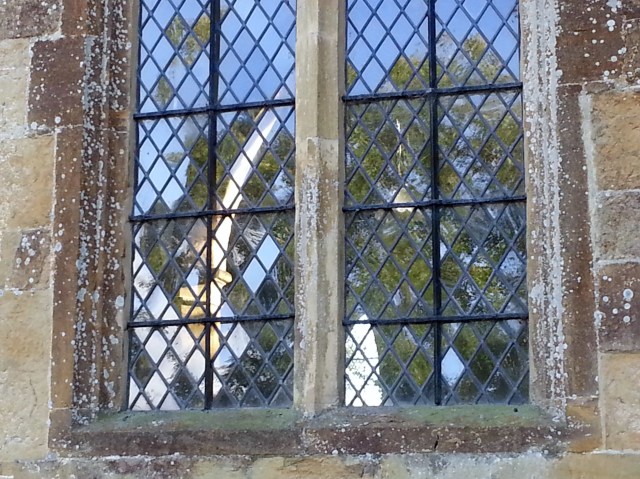 The contrast of light and dark entranced me as the air hung colder and damper in this part of the churchyard, devoid of the warmth of the sun:

I hope you enjoyed these photographs.  Here now is the next installment of Bill’s story in 99 words. Previous installments can be found here.

No Way Out Part Four: The Grave

Bill lurched backwards as disbelief spewed down on him like a black-as-death oil slick.

“Someone knocked him off his bike, we’ve got to get to the hospital now… c’mon!”

Bill remembered the dead-eyed boy who haunted his dreams. Panic kicked his chest as he climbed into Laura’s car: he thought his days weeping at his son’s grave were over, with nothing left to lose.

At the hospital, fear leached from his brother’s broken body. Only the beep, beep, beep of the heart monitor played to the sick symphony of Bill’s long nightmare.

Sherri's work is published in magazines, anthologies, her Summerhouse blog, and memoir column at Carrot Ranch, an online literary community. As a young mum of three, she emigrated from the UK to California and stayed for twenty years. Today she lives in England's West Country with her family and two beautiful black kitties. A keen walker and photographer, she is working hard on her memoir. Her 2021 entry to Fish Publishing Short Memoir Prize was shortlisted and also received a special mention at Spread the Word Life Writing Prize.
View all posts by Sherri Matthews →
This entry was posted in Flash Fiction, Photos and tagged Churches, Dorset, England, Flash fiction, Light and Dark, October, Photos of Graveyards, Somerset, Stonemason, writing. Bookmark the permalink.

86 Responses to Flash Fiction: No Way Out Part Four: The Grave