What makes your day?  I have to admit, the first time I read Lisa’s prompt for her bite size memoir challenge, the first image that struck me was of my old friend Clint, or should I say Dirty Harry. But my other friend Geoff took that idea running and made a much better job of it than I.

But aside from looking down the business end of a 44 Magnum and being, how shall we say, coerced into making someone’s day,  it is in the small moments of life that we find the most joy. Those indescribable moments when somebody takes the time to say or do something nice for no other reason than they actually mean it and not because they have an ulterior motive.

Or when our kids call to say hi, just because.  Or when you hold the door open for someone, male, female, young, old, who cares, and they actually take the time to say ‘thank you’.  Or when we remember to send a friend a message to say we’re thinking about them. These things really do make our day and it doesn’t take much.

These past few weeks have been harrowing, not least of all because I have only just managed to go without painkillers these past four days after four weeks of agony thanks to  a tooth extraction which turned into a surgical extraction. I will leave the rest to your imagination.

Towards the end of October, I might have mentioned (oops) that I was going to take some time away from blogging this month. As in the entire month.  Well, as you can see, that hasn’t happened.  Don’t ask me why.  I fear I will end up waffling so I will write more about that later.

I recently attended my first gathering of literary prize winners. It was inspirational listening to a few of the winners reading excerpts from their poetry, short stories and novels and telling of their journeys to publication.  It really fired me up to keep writing and write some more, and some more after that.

Afterwards I chatted to a few of them. It was my first time meeting a group of writers (offline!) but I was one of the few who turned up who either wasn’t a winner or a friend or family member of one (I found out about this event through my local bookstore). When asked by one or two in conversation, ‘Are you a writer?’ it felt wonderful to reply, ‘Well, yes, actually, I am!’  And without making any apology for it.   That really made my day.

Hubby and I took a walk yesterday through the gardens and grounds of the glorious Forde Abbey, a private home open to the public from March to the end of November.  Aspie D came with us.  She took lots of photos, including a few silly ones of us larking about.  Now that really made my day. 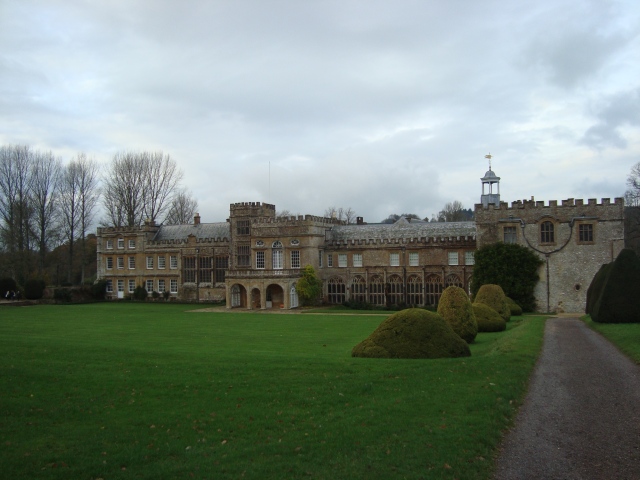 But my thoughts hide in the shadows as I grieve for the recent loss of a dear family friend and struggle with the endless problems caused by my dear old dad’s release from prison this week. He is 82, in poor health and at this point, there is nothing else I can add to the story.  But I’m sure things won’t stay quiet for long.

With these thoughts in mind, and always so grateful for the small touches, the priceless gifts of the overwhelming kindness of family and friends, online and off, it is this story, in 150 words, no more, no less, that I tell today:

The first article I ever submitted to a magazine was about my relationship with my alcoholic father and the peace I had eventually found in our relationship.

Following Prima’s instructions for submission, I posted my manuscript and waited. And waited. Weeks went by and nothing.

That’s it, I thought. I’m not up to the mark, they didn’t like my story. But something niggled away at me. I decided to go for broke and followed up by email. Again, I waited.

Two weeks later I took a call from the editor of Prima; she wanted to publish my story. I was ecstatic. But Dad was busy robbing a bank at the time (I later discovered) and I needed his agreement.

At last, from prison, Dad told me how proud he was of my writing and gave me the one thing I ever asked of him – his blessing to write his story.

Sherri's work is published in magazines, anthologies and her blog. As a young mum of three, she emigrated from the UK to California and stayed for twenty years. Today she lives in England's West Country with her family and two beautiful black kitties. A keen walker and photographer, she is working hard on her memoir. Her 2021 entry to Fish Publishing Short Memoir Prize was shortlisted and also received a special mention at Spread the Word Life Writing Prize. She was also a Page Turner Awards finalist.
View all posts by Sherri Matthews →
This entry was posted in Bite Size Memoir, Blogging, My Dad's Alcoholic Prison, Writing and tagged Alcholism, Bite Size Memoir, Blogging, Clint Eastwood, crime, fathers, Memoir, prison, writing. Bookmark the permalink.