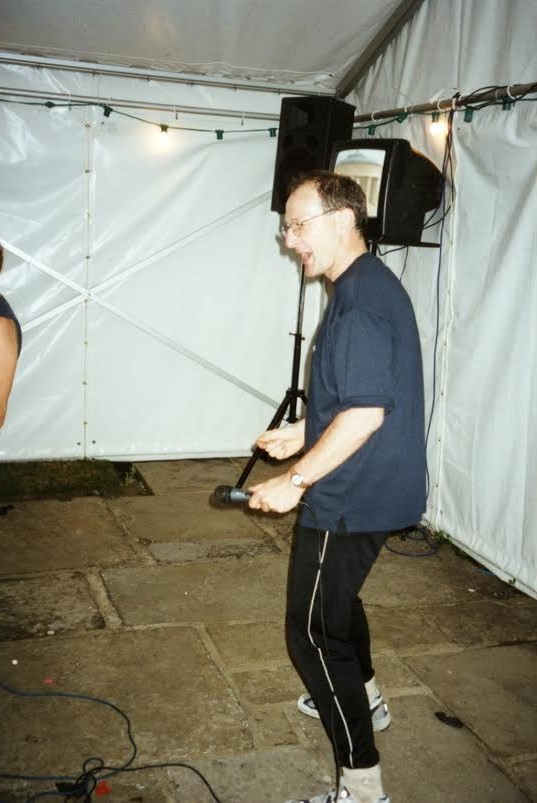 I had the pleasure of meeting Geoff at the Blogger’s Bash in June and he is as warm, friendly and genuine – and yes, funny – as I knew he would be.

A fellow Brit living in London, Geoff is a published author and prolific blogger who tries to fool us with his biting, self-deprecating wit, hoping we won’t notice that he has a heart as big as a lion’s. But it hasn’t worked. He’s a big softie is what I’m trying to say.

As his photo might suggest,  sadly, he won’t be singing or dancing for us today, but he will be sharing how he got writing in the first place, along with great advice for any newbies like me beating down the brambles along the path to publication. So with enough from me, it’s over to him: please welcome my lovely pal Geoff:

My Father and Other Liars

How did this all begin and what has it taught me?

I’d like to say I’ve been writing since X grade at school but the truth is sadder than that. I remember an English teacher, Mr Doubleday, giving us a project that involved writing the first chapter of a novel. I had this marvellous idea; I love cricket so I wanted to set a murder mystery alongside a cricket tour of the Caribbean islands. Maybe the first chapter was a bit cricket heavy and mystery light but Doubleday wasn’t impressed and said so. Instead he praised some bit of fluff by a contemporary, Richard Trillo. I’ve not seen Richard since school and doubt he follows this blog. Ditto Doubleday. I wish them no ill will but they should know they put back my writing career 40 years. Am I bothered…?

Lesson one: do not diss a novice writer. Praise and more praise and yet more praise. Criticism, technique and all that malarkey can come later. Just get people writing until they have enough confidence to withstand the truth.

I had no intention to try my hand at any sort of creative writing. Indeed I considered myself without a creative bone in my body. My father, revered and reviled equally down the years, was the family laureate, turning out poems to order and writing with flair and fortitude. How, or more reasonably why would I try and do something that would be pale by comparison? An example. Dad and I went walking every year for about 15 years, with other friends. On one walk – Offa’s Dyke maybe – our companion threw out a challenge, a first line of a limerick for us to complete. Within what felt like seconds Dad was reeling off limerick after limerick. My one humble offering was ignored. I just listened to a master and laughed.

Lesson two: do not be intimidated by others who have been there, done that. It’s a trite but true statement that we all have to start somewhere and you are nether too old, nor too young, too stupid nor too uneducated to write. If you can write you can tell a story. That’s all it takes, a modicum of language to communicate.

My family, when the children were at school, enjoyed a week at a summer school, held every year over three separate weeks at Marlborough College, a rather grand private school set in awesomely picturesque grounds in the Wiltshire countryside. The courses were pithed at all ages and they had a splendid time while I toiled at the legal coalface. Inevitably the children reached an age where holidays in Greece with friends seemed more attractive. Still my wife wanted to go and suggested I might like to join her. We could do a class together – we learnt to jive and jitterbug, as it happens – but there would be a slot for me to fill while she went off printing or whatever. I chose to write a ten minute radio play in a week. The course was run by an extraordinary woman, who’d been published, written for radio and all sorts. Her ego knew no bounds as all the examples she chose to illustrate her points on character, narrative arc and so one came for her own oeuvre. I enjoyed it immensely and we performed each other’s attempts with vigour if not skill.

Lesson three: take a course, any course, if you need a push. You’ll find the most important thing as you struggle with the notion of you as a writer: there are loads like you out there – novices, all uncertain, fumbling in the dark. No one starts brilliant. They just start.

I didn’t really see playwriting as being for me. I tried a smidgen of poetry which was, frankly embarrassing. But I tried. A week or so later we went, the whole family, to Devon. We hired this massive place in Torbay with a hot tub and heaven knows how many rooms and the kids brought a load of friends. In the evenings they took over the lounge to play Risk or watch DVDs or sat in the hot tube and did teenagerly things (i.e. those that involve your parents being a long way away but within screaming distance). The Textiliste wanted to practice her printing so what was I to do? Read? Sure but I had this urge, this mad idea…

Lesson four: writing is all about a mad idea, given life. For heaven’s sakes we are adults. Making things up is for loons and little ones. Telling stories requires two things. Skill and, erm, skill. Doesn’t it? Don’t you have to be born a genius at this art? Not at all. You just have to believe. And boy is that the hardest thing.

The idea? One of the discussions at Marlborough centred on where to get story ideas from. Our facilitator suggested taking a phrase, any phrase and imagining what might be behind it. We were given the task of using the phrase to sketch out a synopsis for a play, do three or four and then ask the rest of the class which we should write. I had this idea for a buddy story, with the title ‘Right to Roam’. A comedy. The class trashed it in favour of ‘The Light at the End of the Tunnel’ which turned into a Victorian melodrama/ghost story. But I liked ‘Right to Roam’. I thought it had legs. I thought it might even be a novel. But a novel is huge. How on earth do you write a novel?

Lesson five: Anyone can run a marathon if they can run; anyone can write a novel if they can write. One is a series of individual steps leading to 26 miles, 385 yards; the other a series of sentences that add up to about 80,000 words. I’ve not run a marathon but I could. It would hurt, it would be exhausting but I could. All I have to do is want to do it. Same with a novel. But unlike my bucket list marathon, I really really wanted to write that novel. So I typed a first sentence.

Lesson six: that was the hardest part, really. But it wasn’t that hard. Really. It was shit, but so what. You must write that first sentence and then move on. Don’t not sit and agonise over its quality.

The novel grew and grew. It turned dark, then darker. The comedy went. A dead woman appeared and became the centre of the story. I plotted none of this.

Lesson seven: whether you plot or you use the seat of the pants there is no right way to develop a story. All that matters, like the marathon, is that you continue to an end. It may not even be the end but just get there. Procrastination is a desire to perfect, an understandable feebleness of mind. You can, you will, change damn near everything in the editing but unless you get the four corners of your story on the page you can’t move on to the polishing.

I wrote 135,000 words in four months. A few good friends read my masterpiece and tried to be nice. I owe them so much for reading my verbal stodge.

Lesson eight: people will be amazed at you writing a book length set of words and mistake it for a novel. They will want to read it; they will insist and you will be proud of your achievement so you will let them. Please understand if they find it hard to be garrulous with the praise. The achievement is finishing your first marathon, not the time you take; same with your novel. You have a start. After that it’s all… hard bloody work. But that’s another story and I for one am grateful I took the plunge.

My Father and Other Liars is the second book by Geoff Le Pard.

Published in August it is available as an ebook and paperback here:

His first book, Dead Flies and Sherry Trifle can be found here:

Geoff Le Pard started writing to entertain in 2006. He hasn’t left his keyboard since. When he’s not churning out novels he writes some maudlin self-indulgent poetry and blogs at geofflepard.com. He walks the dog for mutual inspiration and most of his best ideas come out of these strolls.

Thank you for your wonderfully honest and encouraging guest post Geoff.  And you never know who might be reading – Richard Trillo and Mr Doubleday perhaps?  They do say life is stranger than fiction…

While bringing her memoir, 'Stranger in a White Dress: A True Story of Broken Dreams, Being Brave and Beginning Again' to publication, Sherri's articles, short memoir, personal essays, poetry and flash fiction are published in national magazines, anthologies and online. She invites her readers to share the view at her Summerhouse blog and is a regular contributer and columnist at 'Carrot Ranch', an online literary community. In another life, Sherri lived in California for twenty years, but today, she lives in England writing stories from the past, making sense of today and giving hope for tomorrow.
View all posts by Sherri Matthews →
This entry was posted in Guest Blogs and tagged Book Blog Tour, Guest Blog, Guest Post, writing, Writing Advice. Bookmark the permalink.