Times Past Challenge: Chinese Spoons And Eating Out

Posted on February 1, 2016 by Sherri Matthews

Dressed to impress in my purple and white midi dress my mother had made for me and  patent leather, navy-blue sling back shoes with block heels, I walked into the dimly lit Chinese restaurant, mesmerised by the brightly coloured lanterns hanging from the ceiling and the soft, almost hypnotic music filling the room.

It was the mid 70’s, I was twelve and staying with my dad for the school holidays in Brighton, and he was taking me and my brother out for dinner.  My first time eating out at a restaurant for an evening meal and, as it turned out, the last time with my dad.

I didn’t know what to order, so Dad ordered what he was having: a bowl of crab and sweetcorn soup.  When the waiter placed the small, deep bowl in front of me, I wasn’t sure at first what to make of the strange, thick-looking soup with the white streaks floating amongst the sweetcorn.

Dad urged me to try it, warning me to be careful as it was very hot, a fact borne out by his steamed up glasses. And then I noticed the white, ladle-like Chinese style spoon placed next to my bowl.  I had never seen such a spoon; its shape and also the unusual design on its base fascinated me.

As a tail-end ‘Baby Boomer’ growing up in 60s and 70s southern England,  eating out at a restaurant for an evening meal just wasn’t done.  The cost was out of reach for my parents and even if cost wasn’t a factor, restaurants were not family-friendly.

The only ‘fast food’ we had, and then as a rare treat, was when my mother left me and my brother in the care of my dad for the day when she took her prized Siamese cats to London for a cat show.  Dad always, I say always, got us fish and chips wrapped in newspaper for lunch, which we ate at home with plenty of salt, vinegar, fat pickled onions and lashings of tomato ketchup. 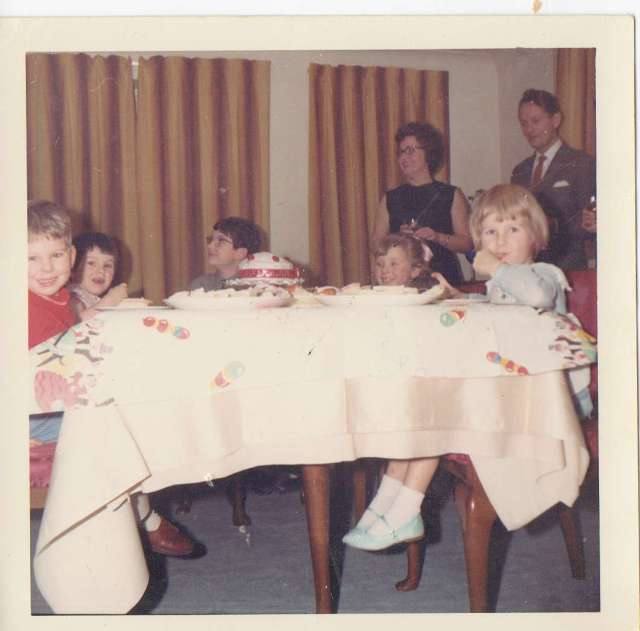 We didn’t eat out as kids, but we did enjoy family gatherings, such as this tea party for a cousin’s birthday. Me on the right. Always the kid with chocolate on her face. Nothing’s changed…
(c) Sherri Matthews

Pubs, if you were lucky, offered crisps, peanuts and sometimes a cold sausage roll or curled up ham sandwich on dry, white bread spread with margarine.  Pub meals were not the thing and children weren’t allowed inside.  By the time I was old enough to go with my friends, the only meals on offer, at least in the pubs where I hung out in Ipswich, were scampi, chicken or sausages and chips served in red, plastic-weaved baskets.

But when I was seventeen, my Radio Caroline listening boyfriend took me out for a meal for my birthday to a Berni Inn.

These ‘inns’ were all the rage across the country in the 70’s because they offered all and sundry an affordable, three course meal consisting of prawn cocktail, steak with all the trimmings (in Britain this means mushrooms, peas, grilled tomatoes and chips) and Black Forest Gateau.  Also included was a glass of wine and coffee to follow.  Very swish, we thought.

I remember that night for two things: the black maxi dress I wore, thinking how grown up I must have looked, and the horrendous stomach ache I had later on.  I blamed it on the coffee which never did agree with me. It was a great night out other than that.

But it is the memory of a Chinese meal one night in Brighton that endures:  the soup was delicious, the spoons fascinating and the time with my dad priceless.

This post is written in response to a new and intriguing monthly challenge set by memoir writer Irene over at Reflections and Nightmares:

‘I’d like to invite you to join with me in a prompt challenge that will give us social insights into the way the world has changed between not only generations but also between geographical location. The prompt can be responded to in any form you enjoy – prose, poetry, flash, photographs, sketches or any other form you choose. You may like to use a combination of the two. I will also add a series of questions for those that would like to join in but don’t know where to start.’

Irene will give us her next prompt for February this week, giving me time most generously to squeeze this post in for January’s ‘Eating Out’ prompt (thank you friend!). You can read the other responses to her fascinating challenge here.

Thank you all so very much for your wonderfully encouraging response to my post two weeks ago and for your understanding when I’ve been so lax in posting and visiting your blogs, especially last week.  But this week I’ll do my best to catch up, so get the kettle on and the wine chilling – I’m heading your way, rain, snow or shine!

Sherri is a writer with work published in print magazines, anthologies and online. As a young British mum of three, she emigrated to California and stayed for twenty years. Today she lives in England's West Country, a full-time carer within her family. Her current WIP after completing her memoir is a psychological thriller.
View all posts by Sherri Matthews →
This entry was posted in Family Life, Family Memoirs, Times Past Challenge and tagged 1970s, Baby Boomers, Berni Inn, Brighton, British Pubs, Chinese Food, Chinese Spoons, Family Life, Family Memoirs, Ipswich, Memoir, Times Past Challenge. Bookmark the permalink.

113 Responses to Times Past Challenge: Chinese Spoons And Eating Out