Threshold of a New Beginning

On the threshold of a new beginning, a point of entering.

This week, over at the Weekly Photo Challenge, Krista asks us to share a photo that captures that moment ‘just before a new beginning — that split-second moment in time, full of anticipation. All the hard work is over; relief is palpable.’

There are many photos I could have used for this challenge but the choice was easy.  This photo was taken in the mid 90s of my three children, dressed up for an Easter church service.  I was not a girly-girl, never have been, and my daughter (Aspie D) was/is the same, but I did love to make her a new dress every Christmas and Easter because I loved to sew.

I knew that she would happily wear the dresses when younger (and had no choice, awful mother that I am!) but I knew that it wouldn’t be for long before she refused so I got in there fast!

Having made that year’s Easter dress and bought the boys proper shirts and trousers for the service, I thought it would be lovely to take a nice photo of them in the back garden/yard before we left for church.

We hadn’t long lived in the house where this photo was taken, having lost our previous home due to the market crash of the early 90s and a serious problem with a neighbour who liked to stalk us and take pot shots from his roof with a high-powered rifle. (I’ll save this little bedtime story for another time.)

What matters now, is that we had settled in nicely and were on the threshold of a new beginning for our family.  We were no longer homeowners but tenants and we faced a long climb back up to rebuild in every sense of the word, yet the five years that we went on to live in that house were the happiest for my marriage and our family life.

Thinking, then, back to this time when I tried to take this photo and the kids just wouldn’t cooperate.  They were restless, wanted to get church over and done with so that they could get back home to the Easter Egg hunt we always held in our back garden,  back to their soon-to-be devoured chocolate as any kid would.

Trying to keep little Aspie D from running off and the boys from pawing at each other as boys do, never mind standing straight, proved to be impossible.  In the end, just before I took one last shot, they exploded into fits of laughter. 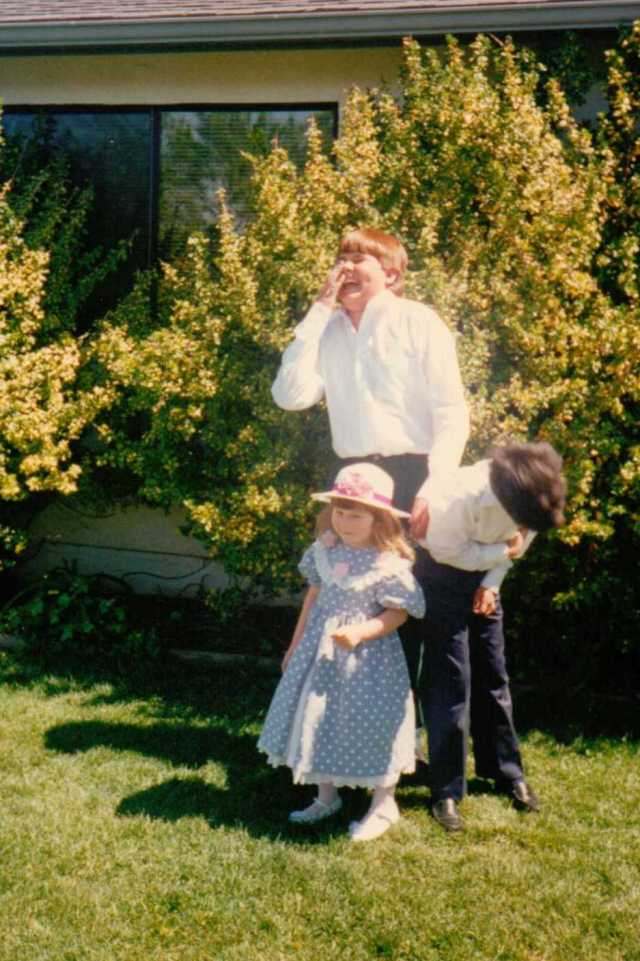 Taken on the threshold of our new life together, it turned out to be one of my most treasured photos, one which reminds me of deep-held memories that, despite our  many challenges, we shared a good and rich family life in California filled to the brim with moments like these.

I’m also reminded that this same richness plays out in the joy and laughter shared with my adult children today.

‘The best thing about memories is making them’ – Anon

Sherri is a writer with work published in print magazines, anthologies and online. As a young British mum of three, she emigrated to California and stayed for twenty years. Today she lives in England's West Country, a full-time carer within her family. Her current WIP after completing her memoir is a psychological thriller.
View all posts by Sherri Matthews →
This entry was posted in Childhood Memories, My California, Weekly Photo Challenge, Writing and tagged California, Childhood memories, Children, Easter, Family Life, laughter, Market Crash, postaday, Weekly Photo Challenge, writing. Bookmark the permalink.

90 Responses to Threshold of a New Beginning