The Weekly Photo Challenge theme this week is ‘Abandoned’.  The scope here is endless, open as always to individual interpretation.  It could be about buildings, ruins, wastelands, or things that are overlooked.  It could also be about people.  I knew what I would write about if it were a writing challenge but then it came to me immediately which photographs I wanted to share and so the decision was easy this time.

In 2010, Hubby and I visited Crete for our first time (we have been twice).  Hiring a car is the way to go with so many delights to explore away from the tourist trail. Not only hidden coves that open up at the end of narrow, dusty roads but desolate ruins from an ancient civilization to be discovered in the most deserted of places.

It was during one of our drives off the beaten track that we came across some ancient Minoan ruins which date back as far as the 27th century BC.  I share here some of my photos of these ruins, together with a short piece I wrote a couple of years ago for a writing assignment.

For this assignment, I had  to describe a place to the extent that others reading it would feel as if they were there so I wrote about these ruins of an ancient Minoan civilisation, reminded as I was by stirred-up memories of a place which was to me so beautifully enthralling in its desolation, in its abandonment.

I hope you enjoy my take on this week’s challenge.

The dusty road was narrow and meandered along the edge of the valley below taking us higher with every curve and bend as we drove, the tyres clinging to the road’s edge as if for dear life.  Inside our hire car the cooling air conditioning made us forget about the intense heat burning outside. Olive trees growing on the other side of the road twisted their branches towards each other providing shade for small herds of wandering mountain goats. 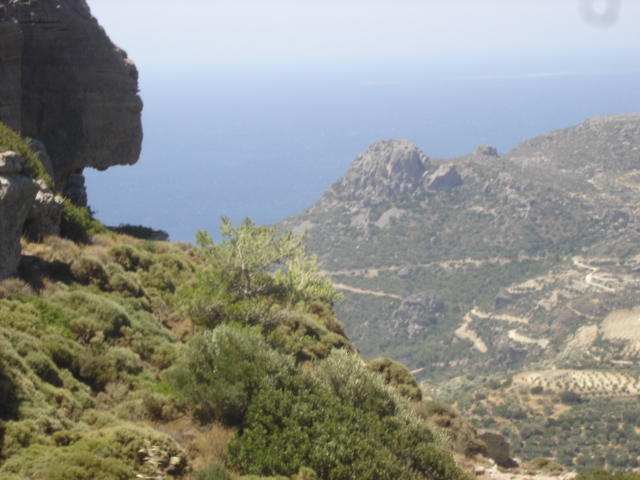 We reached the top of the road and parked.  Getting out of the car we were reminded of the heat as it instantly blasted away all memories of cool comfort. Brown, bone-dry dirt crunched beneath our sandals as we walked towards the entrance of the ruins of an ancient Minoan Palace, our destination.

Lush grape vines grew along both sides of a small path and after a short walk they fell away, revealing in the distance a stunning view stretching out beyond and far below the palace ruins. A turquoise sea, sparkling like thousands of diamonds in the shimmering sun just as it had done so long ago, as if declaring itself to be a royal mantel for Neptune himself. 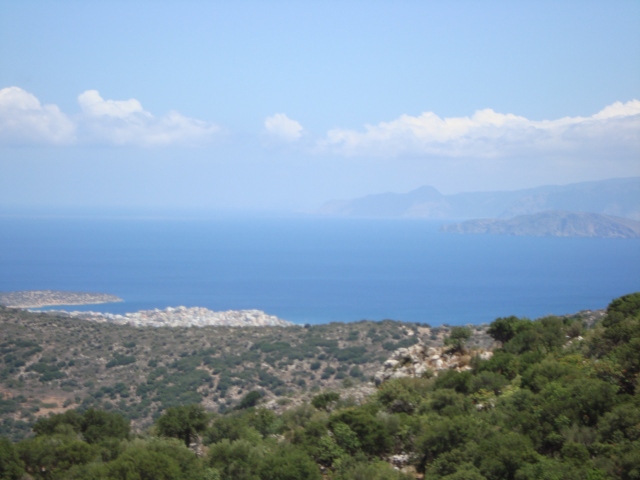 View of of the Libyan Sea, Crete
(c) Sherri Matthews 2014

The contrasting green of the hills cascading down to the yellow sand far below gave such colour as to have inspired long ago stories of Minoan legend and its art, left behind for us to marvel at today.

Transfixed as we were with the beautiful vista, we turned away and began to explore the ruins all around us. We climbed over crumbling foundations and broken walls and could see where once there had been private living quarters, a communal meeting area, a store-room, evidence of a kitchen and even a cistern and a well.  Ancient irrigation!  There too, the King’s bedroom!

An entire community of people had lived here thousands of years before us, working, marrying, raising families, worshipping, dying. 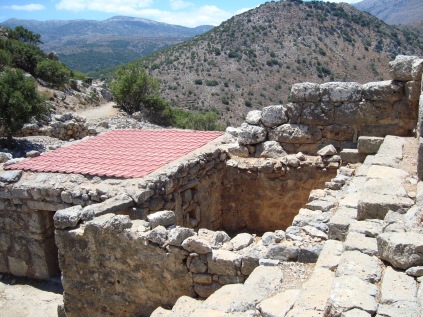 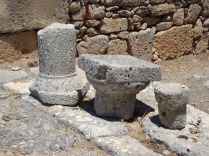 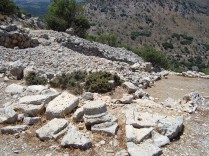 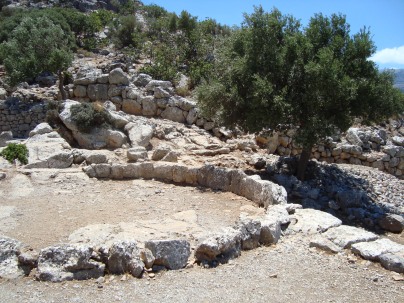 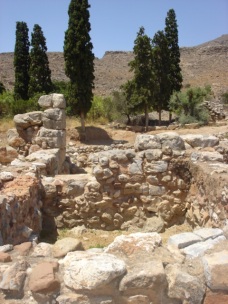 We stood still in the quiet, fierce heat trying to imagine what life must have been like here, so long ago.   This paradise provided an ancient, Cretan people with fresh fish, olives, grapes, nuts, fruits and vegetables on the vine,  plentiful and abundant and they would not have suffered bitter cold.  It seemed an idyllic existence, and for a time it would have been.

This paradise would have been lost to the Minoans of course when the Turks invaded and the once beautiful, untouchable Palace was destroyed and left to rot.

But the ruins cried out day and night for an eternity until someone discovered them and they were once again given to the pleasure of people walking among them and admiring them, even if now in their fallen state.  They gave testament to a proud, peaceful race and we were privileged to have been shown a glimpse of a long-ago but not forgotten way of life.  The ruins were where they had always belonged and they were happy.

Hiding in the trees, cicadas chirruped their grating, summer song interrupting our imaginings and reminding us of the present.  It was time to say goodbye, and we turned to walk back along the path with grateful hearts.

As a final note, it was nice to see that these ruins weren’t totally abandoned; these turtles were certainly at home swimming about in the ancient wells and cisterns! 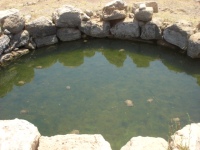 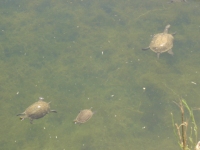 To find out what others are up to with this week’s photo challenge click on the orange ‘post a week’ button on my sidebar.

Sherri is a writer with work published in print magazines, anthologies and online. As a young British mum of three, she emigrated to California and stayed for twenty years. Today she lives in England's West Country, a full-time carer within her family. Her current WIP after completing her memoir is a psychological thriller.
View all posts by Sherri Matthews →
This entry was posted in Creative Writing, Photos, Travel, Weekly Photo Challenge and tagged Ancient civilisation, Creative writing, Cretan, Crete, Minoan Ruins, Photos, Photos of Ruins, postaday, travel, Turtles, Weekly Photo Challenge. Bookmark the permalink.